If you believe that richness brings pride then read on to know about Grandhi Mallikarjuna Rao popularly known as GM Rao. The founder of GMR Group is a billionaire industrialist who has been listed by Forbes as the richest Telugu man along with possessing grounded nature and simplicity. 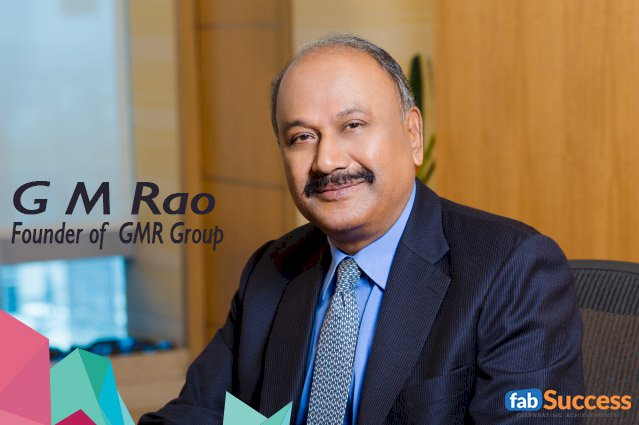 Mr. GM Rao has established GMR Group as one of the most trusted and respected brands in India. GMR Group acknowledged as a leading global infrastructure developer and operator has contributed to a wide array of sectors including energy, highways, massive urban development, and airport sectors. The group has made its mark in 7 countries and is recognized for building and operating assets that have proved to be world-class national assets.

Similar to the deeds of Warren Buffet, GM has also donated a stupendous part of his wealth to ensure the security and a better future of the people and society. The GMR group runs a CSR wing known as the GMR Varalakshmi Foundation that has been set up to fulfill the needs of the underserved sections of society. The organization located in over 22 locations and GM been acclaimed by China’s Harun Report Inc as to the third most generous donor of corporate India in 2013. He donated Rs. 740 Crores to achieve this position and in the year 2012 donated Rs.1540 Crores to serve various charitable purposes. A Mechanical Engineer by qualification. GM Rao’s sons Kiran Kumar and GBS Raju manage his business.

On 14th July 1950, GM Rao was born into an upper-middle-class family residing in the Srikakulam district of Andhra Pradesh. His father, Rajam was a small scale jewelry businessman and also traded in commodities. Unfortunately, GM Rao failed in his class 10th examinations, and his family made him leave his further studies. Thereby, he joined the family business and continued to work for two years. After this, he requested his mother, and she allowed him to continue his schooling, and soon enough GM completed his Mechanical Engineering from the Andhra University in 1972 becoming the first graduate in his family. After all this, his father divided the family assets among his sons, both of whom got approximately Rs.3 lakhs and one house.

After the division of property, GM’s father advised him to find a job but GM wanted to start a business, and his mother supported him in this endeavor. But just Rs.3 lakhs were not enough to set up a business and therefore to GM decided to take up a job whereas his brothers embarked on to the trading business.

GM Rao worked as a shift engineer in the  Andhra Pradesh Paper Mills. The highly experienced Marwari businessman gave him a taste of the first-hand experience of running a business. Eventually, he started working as a Junior Engineer in the Public Works Department for a few months.

But his entrepreneurial nature and his mother’s driving force encouraged him to leave these jobs, and finally, he started working in the trading business along with his brothers. Who knew that this decision would be a turning point for him. In a short period, GM had taken and given up 28 businesses to grab the new opportunities, which were waiting for the Indian economy in the early 1990s. With the advent of the ’90s, Indian markets were getting a sense of liberalization and ready to cater to the huge storm of opportunities.

While the GMR group was basking in unprecedented success, the Vysya Bank was facing a very rough phase. GMR group tried to sustain the bank for a significant period of time and to achieve this he staked all his money including his wife’s jewelry. But the drastically increasing competition, enormous capital requirements, and the constantly changing scenarios forced GM to sell his 23.99% stake for about Rs.340 Crores, to the ING Group during the late ’90s. In 2004, GM Rao attended a conference headed by Mr. MV Subbaiah. In this conference, Subbaiah talked about the family succession of the Murugappa group. GM realized that many family businesses have been a part of the industry for over 300 years. Realizing this, he put together a team of senior bankers, HR consultants, etc.  to write a family constitution for his family. After working for more than 570 hours in a time span of over a four-year period, the family constitution was finally laid. It said that the selection of my successor would be done by the next generation and not by GM, the system of good family governance, how to resolve conflict and valuation of the business, the process of inducting new family members into the business, their level of induction and qualifications required, etc. Four Beautiful Destination Of Rajasthan To Do An Intimate Wedding

5 Easy Steps to Follow: If You Want to Be a Successful Entrepreneur