A startup at a village in Kochi has developed an Unmanned Aerial Vehicle (UAV) drone supported with artificial intelligence that can help combat COVID-19 by monitoring body temperature, supplying essential commodities and spraying disinfectants. The unmanned ‘Garud’ has been designed and engineered by AI Aerial Dynamics at the Maker village, which is India’s largest electronic hardware incubator. 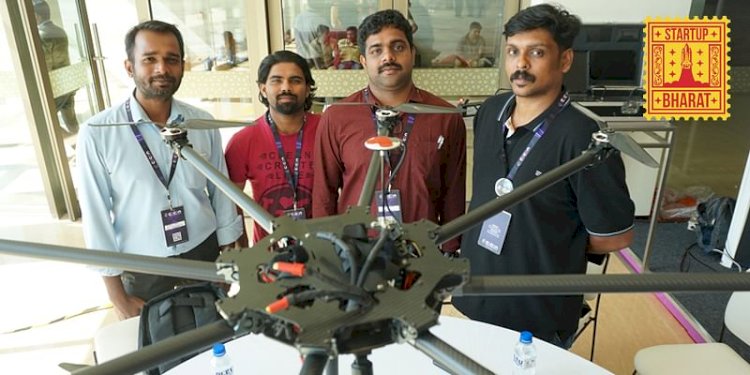 India has long been dependent on foreign countries to import raw materials for machinery. But along with being "Vocal for Local", India is moving towards "Atmanirbhar Bharat" and for that "Make in India" initiatives are now gaining ground and popularity, broadening the scope of being self-reliant for the Indian startups. Following this "Go Local" mantra Kochi based AI Aerial Dynamics which was founded by the college friends Vishnu V Nath, M Rubin Ray, Denny Poulose, and Sujai KJ, is manufacturing indigenous UAVs (Unmanned Aerial Vehicles). The drone tech startup is offering its products at a better cost to consumers. AI Aerial Dynamics was incubated at the Maker Village, Kochi, in 2019, and the company was registered in January 2020. Vishnu, the vice-president and CTO at the company remembers, "Starting as a hobby to build remote-controlled air-crafts, the team, having successfully tested the UAVs, designed a business plan and started the company." There is a team of eight employees in the startup.

Now, the company has joined hands with the Kerala Government to combat corona-virus. The indigenously made drone, Garud can monitor roads and bylanes, besides residentials pockets and aerodromes that have been locked down across the country since March 25 in an effort to check the spread of the deadly virus. Vishnu said a striking feature of the drone is that unlike those used by filmmakers and others, the unmanned aerial vehicles (UAV) designed by the company are powered by artificial intelligence (AI).

Also, the aerial can collect thermal data by using an array of IR sensors and advanced digital technology called EDGE (Enhanced Data rates for GSM Evolution), thus working as a means to combating the pandemic. The drone can accumulate swabs and samples of people for the Covid-19 test. It has the capacity to carry weight up to 60 kg, thus facilitating the distribution of even essential and medical commodities if there is an exigency. The integrated solution was developed fully leveraging globally-benchmarked labs and equipment besides product development software solutions available at Maker Village. Only carbon fibre and batteries are imported from Germany and the USA, respectively. "The design and manufacturing of the drone are done in-house. All the parts are manufactured using in-house equipment and utilizing Maker Village Lab facilities," says Vishnu.

The unmanned Garud is claimed to be India's largest electronic hardware incubator and ESDM facility. Further, Garud can feature a modern sprayer that can be used to shower disinfectants from above. It has also a loudspeaker for public announcements. "Besides, the AI-supported engine, the fully-automated Garud has a high-resolution camera, a facility to carry weight, a micro-sprayer, and thermal scanner. The visuals it generates can zoom into specifics with centimeter-level accuracy. The images it captures will be simultaneously saved in the operating unit on the ground." Vishnu continues, "If the vehicle loses range or exhausts battery (capacity: 150 minutes), it will fly down to the point of take-off."

The UAV uses a hybrid engine for its flight. The drone is capable of adapting to requirements since it has been developed indigenously. The vehicle was widely used for relief activities during the flood in the year 2019. A state-of-the-art lab in Maker Village enabled IA Aerial Dynamics to conceive and engineer the prototype for Garud, according to him. Though there is tough competition in the market, Vishnu positively says, "Our USP is that we offer customized products as per client requirements."

IA Aerial Dynamics is also developing drones for the NPOL lab of DRDO and other defense establishments. The startup is looking forward to getting its products certified by the Indian government. Additionally, "We have been working on manufacturing heavy-lift UAVs that can carry humans, and we are also looking forward to raising funds from grants," Vishnu says.

Get Up And Prepare Yourself For Success - Daily Dose Of Motivation