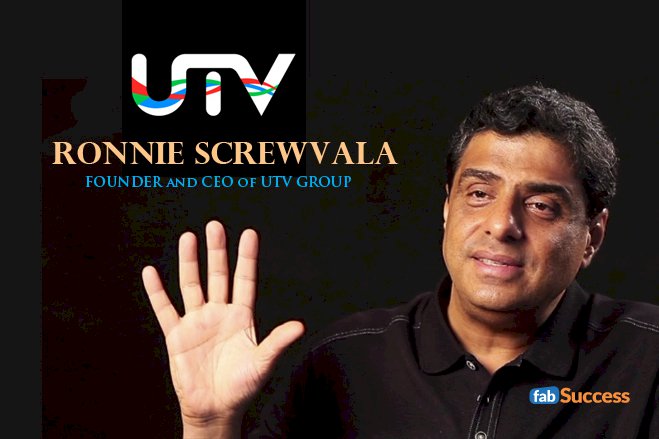 Rohinton Soli Screwvala, aka Ronnie Screwvala was born on 8

After the deal with ZEE TV, the following chain of events started to unfold:

UTV sought to widen its gaze and incorporated in-flight entertainment with the cooperation of Air-India.

In the year 1993, the company started gathering external producers and began marketing airtime on their programs.

After a couple of years, in 1995, UTV launched a daily soap, named “Shanti.” After that, they acquired 54.60% stakes in Laezer Production Private Limited with a plan to enter into the post-production business. Later, in December 1995, he renamed the company to “UTV Studios Limited” and started providing post-production facilities to private producers, television software houses along with advertisers. The company in the same year ventured into movie distribution business as well.

The following year, in 1996, UTV grabbed a Disney contract wherein they were given the right to dub the whole of Disney’s library into Indian languages. The same year, UTV started offering its in-flight entertainment package in international airlines as well.

In the year 1998, one of the company’s subordinates, USL (UTV Studios Limited) acquired Ram Mohan Biographies (an animation production house) and later renamed it to RM-USL which again changed its name to finally become UTV Toons.

In the year 2000, UTV incorporated a group company called “UTV Net Solutions Ltd. (UTV Net)”. With an 86% stake, their main focus was now on content creation for Internet via Indian Regional Language portal (with dual language content) and control of their audio/video library rights for internet usage.

Soon after, in the same year, UTV bought “Western Outdoor Media Technologies Limited (WOMTL)” with clear intentions of gaining a leading position in the post-production special effects and animation genre.

In the year 2004, UTV launched the much hyped about kids channel, “Hungama TV” which became an instant hit with kids in no time; making it one of the most sought after kids channel in the country.

In the following year i.e. in 2005, the UTV group got itself listed in the Bombay & National Stock Exchange.

In due course, UTV made an outsourcing partnership deal with a US-based BKN New Media Inc worth $10 Million. After the much puffed up deal; UTV Toons expanded to about 200 employees and also purchased an additional eight software licenses for Autodesk 3D.

In the year 2008, UTV entered the foray of broadcasting business via its broadcast channel, UTV Global Broadcasting Ltd. (UGBL) and progressed on to opening six channels, namely –

In the year 2011, a prolific era finally came to an end as Ronnie finally sold off UTV to ‘The Walt Disney Enterprises’ at around INR 20 billion or simply INR 2,000 crores.

The dream run was finally overhauled by Disney, who, as part of the deal made a complete buyout of the public shareholders and also delisted UTV from The Bombay Stock Exchange and The National Stock Exchange alike. And in the year 2012 (2nd February, 2012 to be exact), UTV became a fully owned subsidiary of Disney South East Asia Pvt. Ltd with Ronnie continuing as the Managing Director.

Out of the total INR 2000 crores that Ronnie made from this deal; he spent around INR 800 crores investing in start-ups through Unilazer Ventures – a private equity venture fund of Mr. Screwvala. The list of companies he invested in, include –

Along with some other offline ventures.

In the year 2014, Ronnie astonished everyone. He came up with an official announcement, confirming that he would be stepping down from the position of the Managing Director of UTV and quitting the company for good and that Siddharth Roy Kapur would be taking over as the new Managing Director of the company; despite the fact that his contract was to last a good 5 years hence.

Thus, marking the end of a remarkable voyage of Ronnie Screwvala & UTV!

During their course of run, UTV formed a few joint ventures & subsidiaries; these include:

UTV Motion Pictures:  It was built-in in March 2007 and is also admitted to have traded in Alternate Investment Market (“AIM”) of the London Stock Exchange. The first film produced under this banner was “Dil Ke Jharoke Main.”

UTV TV Content Limited (UTV TV): – UTV TV was a wholly owned subordinate of UTV Software Communications Ltd and was launched in July 2007 with an intention to produce, exhibit and distribute television serials/programs.

IG Interactive Entertainment Limited (IG): – IG was registered in September 2004 with the intention of conducting Syndications, Film Acquisitions, and Distribution business in the UK.

UTV Communications (USA) LLC (UTV USA): – It was built in April 2004 with a parallel intention to that of IG i.e. carrying out syndications, film acquisitions, and distribution business, but in the United State of America (North America) and other surrounding territories.

UTV Games Limited (UTV Games): – It was established in September 2008. A property of UTV Software Communications Ltd., UTV Games, carries the principal activity as of investment holding. It also holds a massive 80% of equity stake in True Games Interactive Inc. (an online gaming start-up Company based in California, USA).

UTV New Media Limited (UNML): – UNML is again, a fully owned subsidiary of UTV Software Communications Ltd. which was incorporated in September 2007. Its primary work is to conduct the development & maintenance of websites. It also holds the digital rights on acquisition and exploitation of mobile and digital platforms.

Smriti Irani Television Limited (SITL): – It is a 50:50 Joint Venture between UTV Software Communications Ltd. and Mrs. Smriti Irani. It was formed in December 2007 with the primary focus of television content production.

Ronnie, in the early days of UTV itself, formed a foundation – SHARE: Society to Heal Aid Restore Educate (SHARE) for the development of rural areas in Maharashtra.

Later, he changed the name to Swades (from former brand name SHARE). With this foundation of his, Ronnie intends to empower the communities by giving them the capability of transforming their own lives. So far, since the last five years, Swades has provided drinking water to over 39,000 people in 139 villages in rural Maharashtra.

As of today, Ronnie has amassed a whooping INR 2350 crores for his foundation from his own pocket, which is in parallel with the amount in donations.