Kolkata Knight Riders (KKR) got back to their winning ways in the Indian Premier League (IPL 2020) after defeating the Chennai Super Kings (CSK) by 10 runs in a thrilling contest. 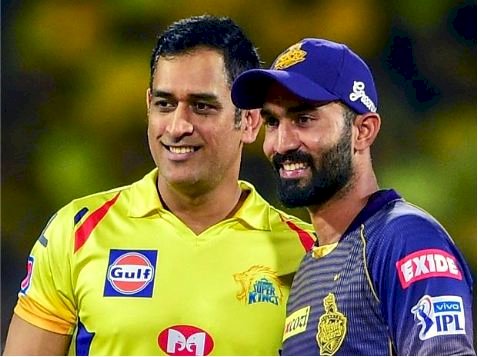 Just when it seemed Chennai Super Kings were starting to rediscover their rhythm after lean patch, Dinesh Karthik’s shrewd tactics halt them in their tracks as Kolkata Knight Riders climb to the third spot on the points table with their third win of IPL 2020. For Karthik, his biggest takeaway from this victory will be Rahul Tripathi’s utility as an opener as well as the usefulness of Sunil Narine with the ball in the second half of the innings. For Chennai, there might be some change in personnel next game, with Kedar Jadhav most likely to get benched for a game or two after a poor display with the bat today.

Earlier in the day, KKR got 93 in their first 10 overs and just 74 in their final 10. Somehow, CSK have managed to outdo that. They were 90/1, bossing the chase at the halfway mark with Watson and Rayudu looking fluent at the crease. But then suffered an incredible slowdown after losing the two of them in back-to-back overs. Their middle-order has been a huge concern in this tournament. It was all well and good when the two openers finished off the chase against Punjab in the previous match. But today, they needed contributions in the middle. That didn't happen. And so once again, a run chase has gone terribly wrong. KKR, for their part, did a sterling job. Especially the spin duo of Narine and Chakravarthy. Narine only came in to bowl in the 12th over and he found his mojo today. Chakravarthy's variations also proved incredibly hard to score off, and he even managed to knock over MS Dhoni which was a pivotal moment. Only a 10-run defeat for CSK which will ensure their NRR remains in decent shape. But the same can't be said about their middle order. Until that fixes itself, they're in some trouble in this tournament. How good was that from Karthik though. His captaincy was in question and fans were demanding to make Eoin Morgan the captain. Dinesh showed his skills and brought on Naraine in the 12th over and also saved few overs from Varun Chakraborty which decided the outcome of the match. Rahul Tripathi for heroics was awarded the Man of the Match and hopefully will open for them for the rest of the season. Dinesh in his post match presentation speech said that he had full faith in Sunil Naaine and that he was never going to drop him. Arguably Sunil Naraine has been their most sought players and that was the reason why he was retained by the franchise before mega auctions in 2018.

The Exciting Journey: From Rickshaw Puller To Multi-Crore Businessman