Some of the most imposing and magnificent forts and palaces on the globe dot the arid Aravali landscape and tell the tales of their glorious legacy. Rajasthan, one of the most colorful states in India conjures up images of majestic forts and radiant palaces, brave Rajput warriors and beautiful lore of queens, compiled with a unique architecture which is renowned all over the world. The architecture of Rajasthan is mainly based on the Rajput school of architecture which was a blend of the Hindu and Mughal structural design. The stupendous forts, the intricately carved temples and the grand havelis of the state are integral parts of the architectural heritage of the state. 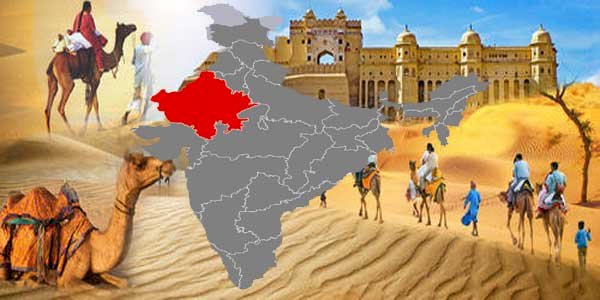 Truly enchanting the princely state Rajasthan will take you on a ride back to the times when the Rajputanas ruled the kingdoms and the queens made the fashion statements. And what better way to experience the royal heritage of Rajasthan than staying in one of the picturesque palaces and become a royal guest and enjoy the opulent luxuries fit for a king as many of the palatial palaces are turned into sumptuous hotels which hypnotize the tourists worldwide.

Here is a list of five enticing palace-hotels, where the history will incline you and the architecture will intrigue you. Rambagh Palace was originally, built-in 1835, has come up gracefully through many royal transitions - from the home of the queen's favorite handmaiden to royal guesthouse and hunting lodge, and later it was perceived as the residence of the Maharaja Sawai Man Singh II along with his queen, Maharani Gayatri Devi. Another jewel in the Taj's crown displays 78 stunningly restored grand luxury rooms and suites in Jaipur, earlier,  were the chambers of the former Maharaja. The palace retains its elaborate splendor, extravagantly decorated with hand-carved marble 'jalis' or latticework, sandstone balustrades, cupolas, and 'chattris' or cenotaphs, and elaborate Mughal Gardens. Within this, the most glorious of palaces, showcasing the best of Rajasthan's royal heritage, you also experience the best fine-dining restaurants in Jaipur. This 'floating palace' or Jag Mandir on Lake Pichola of Udaipur dates back to the mid-1700s when Maharaja Jagat Singh founded this summer resort home for the royals. The walls are adorned by colorful arabesques while the flooring is done with black and white marbles in their best forms. Later in 1971, the palace was taken over by the Taj Hotels and Resorts Palaces. At present, the hotel has 83 rooms having interiors everything royal, from private butler to silk upholstery and carved furniture and is ranked as the most romantic hotel in India. The 347-room palace Umaid Bhawan, known for its spectacular blend of Indo-Saracenic, Western Art Deco and Classical Revival styles of architecture, is one of the most preferred venues for weddings and is an absolute favorite with the Hollywood and Indian celebrities. Taking a milk bath in pink Italian marble tub designed, sinking in sofas, and pampering yourself with the ultimate luxuries are also part of the Umaid Bhawan experiences. The palace experience also involves being looked after by direct descendants of the palace retainers who discreetly and unobtrusively, will guide you through the pleasures that lie within the palace walls. This 475-year-old palace, built by the noble feudatory with the hereditary title of 'Maha Rawal' or 'Maha Saheb' of the Amber and Jaipur, is the epitome of regal Indo-Saracenic architecture. Samode Palace is known for its contemporary luxury and its signature service. The palace is adorned with stunning mirror works and charming arches painted walls and ceilings. The royal suites have a private garden and its own jacuzzi. Each room is a combination of traditional wealth and modern luxury. This luxury hotel which is housed in a 15th-century fort present in the Delhi-Jaipur highway is known for its magnificent views of the surroundings, as the greens of the Aravalli range nestle it. Neemrana Fort Palace takes a lot of pride in being a premier heritage hotel of Rajasthan as also a unique hotel of India raned among India's oldest heritage resorts, ensuring that these time-honored structures are being restored and preserved with authenticity to take the guests back to the medieval times with modern luxuries.

The Promo Of Saath Nibhana Saathiya 2 Is Out And Its Lead Devoleena Bhattacharjee...

Kalpana Chawla’s Dream Retold By Her Father - " She Wanted To Fly , I...