Mr. Imlak Ahmad, the founder of the startup ‘UrbanWale’ is an IT professional. From his early life years to adulthood, he always dreamed of achieving something by setting up his own venture that could have a significant effect on individuals' lives. In 2019, while getting his own house’s plumbing issue fixed, he got the idea of Urbanwale. The startup Urbanwale is now serving a large number of lives in Jamshedpur. 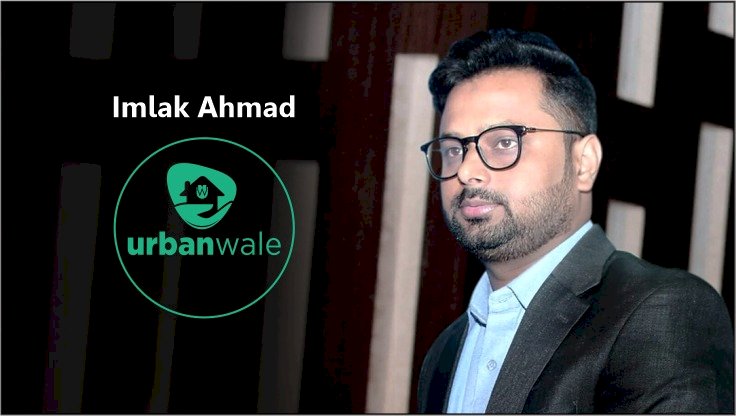 To become successful in life is the dream of every teenager and youngster. There are some people who give excuses for not becoming successful or make count the number of challenges. But real success comes out of challenges only have proved by the founder of Urbanwale – Imlak Ahmad. He is a common guy who belongs to one of the cities of Jharkhand – Jamshedpur.

Imlak Ahmad is from a working-class family who lives in the province of Jharkhand. He is originally from the Ballia region of Uttar Pradesh and brought up in the Jharkhand city of Jamshedpur. His date of birth is 01 February and he was conceived in 1988 which makes his age to be 32 years. He completed his schooling from the same state. Discussing Mr. Imlak’s family, He comes from a white-collar class family who lives in the Jamshedpur city. His father's name is Zahir Anwar. His family is consists of a mother, father two sisters, and a younger sibling. Before he has become a fruitful business visionary, he didn't have a decent economic condition. In any case, his family consistently encouraged Imlak to become what he is today and consistently supported him with each choice that he makes. He is known as Imlak Ahmad founder of the primary association he made was called Urbanwale. Urbanwale has a very fascinating story behind a successful startup. From the beginning, Imlak faced a lot of failures and setbacks, but he chooses not to sit with disappointments and failures because he had a burning desire to do something innovative since his childhood years which makes him stand apart from other children.

VTV India has had the privilege of sharing the innovative story of Imlak Ahmad that has the potential to inspire millions of new-old entrepreneurs. We came across many people who committed suicide in high school and intermediate class due to a low scoreboard. You did not believe that today's successful entrepreneur Imlak passed from the third division and studied at a government school. And then he does not give up hope and continues to work hard to achieve his burning desire to do something different. He has done MCA from Sikkim Manipal University.

He, in one of his interviews, shares about the most difficult incident of his life, as he remembers from his school days -“Just prior to board examination, he had diagnosed with a serious mental condition that could have lost his memory power, as the doctor had informed. However, despite the warnings, with his strong determination and sheer will, he took the treatment, appear in the examination, and cleared it.”

His father played an important role in his today’s success. He always inspires and drives her out of depression. His father wants him to prepare for the government exam but he was not interested in that area. Although this thing really hurt his father, he supported and encouraged him to do the things he loves to do.

When his father retired, all the responsibility fell on him. He started a job in a call center at a salary of 5k to uphold his family. He resigned after working for a few months as it did not interest him. He later took an IT course and applied to several companies to get a good job. But after much effort, he got a job in the government sector with 17k salary. Where he worked hard and soon reached a salary of 45k per month. During his job period, he received several awards from the top government authority for his brilliant work. But as it was a contract based job, there was always a fear of losing the job.

This is the turning point of his life where his earlier burning desire of doing something innovative takes a new birth. And he started looking for a venture. One day he observed that his mother facing plumbing issues and unable to find a good plumber who can resolve her issue permanently. He takes an assessment of his mother's household activities on a closer note for atleast one week. He finds there are various issues his mother face in order to fulfill his day- to- day task. Being a housewife she faces lots of home stress so what about working women and couples. So he takes initiative to start an ultimate venture Urbanwale in order to reduce home stress and makes other life easy to handle. Soon, he created this leading platform Urbanwale. Where he covers up every single household chore that creates home stress like cleaning, plumbing, carpentry, electrical, pest control, appliance repair and installation service, IT services, and much more. Urbanwale inaugurated on 21 October 2019 by the Honorable Cabinet Minister of Indian government (Ex-Chief Minister Of Jharkhand) Shri Arjun Munda. And he started serving thousands of lives by serving doorsteps home services. People also appreciated the teamwork of Urbanwale. There are a lot of people that recommend family and friends Urbanwale to hire Home services. This startup also offers opportunities to various skilled people to attain repudiated jobs and unemployed people can generate a source of earning by associated as a service provider with the platform. Later he also created an android application to make usage easy for his users. These applications not only clear up cell phones with other unwanted apps as this app helps people to book every home service very easily. So there is no need for multiple applications to book for various services.

Urbanwale is an authorized company that serving Jamshedpurians from last year. Presently, as per people’s request, founder of Urbanwale, Imlak Ahmad has been planning to scale up the start-up to other cities of Jharkhand as well.

We all know coronavirus affected every sphere of life. There are various startup owners forced to shut down their ventures. But smart and innovative minds always turn difficulties into opportunities. Similarly, Urbanwale initiator Imlak Ahmad turns coronavirus pandemic into a great opportunity by connecting with people, listening to their requests, by offering various essential services that are being delivered at the doorstep.

Imlak believes that - "we should always turn crises into opportunities" - he learned this from his ideal father.

He offers sanitized fruits and vegetables, pest control, deep cleaning, appliances repair, electrical maintenance, plumbing, sanitization services, and similar other services too. People also finding services very useful as this is helping them to stay at home and conveniently get the hassle-free services of their need at the doorstep while contributing to the fight of a pandemic. Do remember to maintain a positive attitude no matter what’s the problems you are facing. Because when you think positive, your mind gives you several ways to crack your success code.

Always choose something that has the capacity to make a change in the thousand lives. As you know regularity ignored by people and different things catch the attention of many people.

Success comes out of continuity. So always gives priority to your dreams and time. Imlak told in his interview that others respect our time when we themselves give importance to our time.

VTV India's main purpose is to share inspiring stories like Mr. Imlak Ahmad's success story. He wrote his success story in the chapters of history by beating up his failures. Likewise, we want our new-age entrepreneur to take inspiration from his story, and turn the challenges into an opportunity to crack the success

RAMVILAS PASWAN : Unforgettable legacy Who Wore Many Hats With Extended...

Neha Kakkar Gives An Insight Into The Romantic Honeymoon In Dubai With...