Yashasvi Jaiswal becomes the most recent face of cricket after his extraordinary performance against Pakistan in the Under-19 World Cup semifinal on February 4, taking India to the finals. 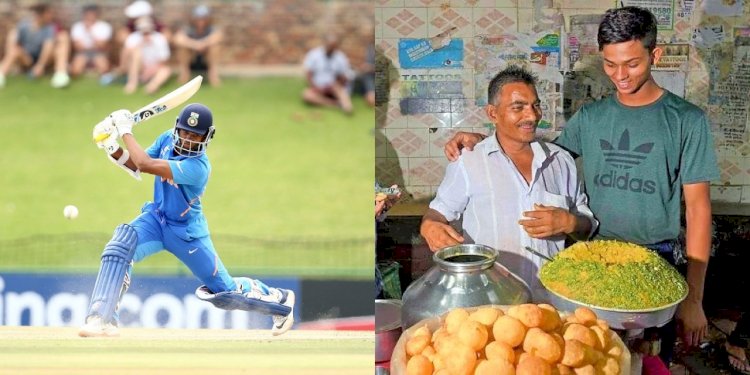 Yashasvi Jaiswal becomes the most recent face of cricket after his extraordinary performance against Pakistan in the Under-19 World Cup semifinal. There were lots of struggles and hardships but the only thing that kept him going was a dream — to play cricket for India. This entire journey started when he was just 11 years old.

6 Years later since then, now at the age of 17, Jaiswal has joined India Mumbai’s Under-19 team for the Sri Lanka tour and gave a remarkable performance.

Let’s know how it all started Jaiswal is from Bhadohi in Uttar Pradesh. He is the youngest among his two brothers. He later moved to Mumbai to chase his passion for cricket. His father was not too happy with his decision as he didn’t do a job to earn for his family and his father it hard to feed the family. He had his uncle who stayed in Worli, in Mumbai but his house wasn’t big enough for another occupant. So, the uncle requested the owners of the Muslim United Club, where he was the manager to allow the boy to stay in the tent. For three years, the tent was his home. He lived with groundsmen in that Muslim United Club.

All these struggles remained unknown from his family as he didn’t want them to stop his carrier in cricket. Occasionally, at times his father used to send some money but that was never enough. He had to sell pani-puri during the Ram Leela in Azad Maidan. But there were still days when he had to sleep on an empty stomach as the groundsmen with whom he shared the tent fought with each other.  But he never gave up. He tried his best to earn money by whichever means. He even plays games with older boys to earn Rs 200-300 to survive a week.

“During Ram Leela, I earned well. I prayed that my teammates would not come there for pani-puri. Sometimes they did and I would feel bad serving them,” he says. There were even times when he missed his family and broke down. He always recalled that he used to see boys of his age bring food from their homes or at times the parents use to bring lavish lunch for their kids. But for him the case was different. he always said for him it was like "khana khud banao, khud Khao".

Mumbai U-19 coach Satish Samant says “Jaiswal has this ability to read a bowler's mind and adapt to a situation. Most under-19 players get tempted to play too many shots too early. He does not. The other thing is, he does not have a smartphone, is not on WhatsApp. This is rare for a teenage cricketer these days. He is cut off from social media. He has the talent and if he keeps focus like this, he will be next big from Mumbai player”.

Jaiswal played his best but maybe that day was not his! But he didn’t break. He comes back home wiser and stronger and now he will chase his passion for playing for India.

Until now he played for the age group tournament but now he will double his efforts be play for India.

The courage and passion this young guy has is definitely an example for all the youngsters. That broken trophy and shattered dream make him more focused.