Dhamaka Movie Review: Kartik Aaryan Tries To Get Through Thriller With Plot Holes

Thriller is a genre of film which is well crafted regardless of screen size, then one likes it. Dhamaka, which stars Kartik Aaryan, Mrunal Thakur, and Amrita Subhash, takes a dig at news channels that are about the 'business of news' rather than journalism and ethics. 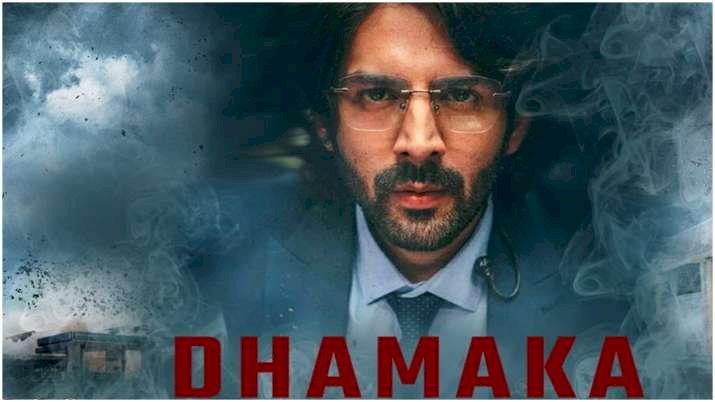 A cynical, frustrated, and egotistical, Arjun Pathak (Karthik Aryan) is a former prime-time news channel show anchor who has been 'demoted' by the management to a radio jockey of a media company due to 'ethical' and 'behavioral' issues. Is. , His personal life is also going through difficult times as his wife Saumya Mehra Pathak (Mrunal Thakur) has filed for divorce by mutual consent. Soumya is working with the same organization as Arjun - TRTV - working as a senior correspondent, and is known to be a journalist who follows the principles of journalism in her work.

One day, Arjun receives a dreaded call on his radio show, where a man threatens to blow up Mumbai's Sea Link in ten minutes. Arjun dismisses it as a false call, in a momentary lapse of judgment, he prompts the caller to go ahead and prove it. Arjun's life takes a dramatic turn as the caller detonates the first bomb planted on the C-Link.

Taking this as an opportunity to make a career comeback, Arjun decides against notifying the caller to the police and the channel head, Ankita Malaskar (Amrita Subhash) to give back his prime-time slot in exchange for this particular story. ) entered into an agreement with. Greed by an opportunity to raise the channel's ratings, he agrees. One positive aspect of the film is the performance of the lead cast. Congratulations to Kartik Aaryan, Mrunal Thakur, and Amrita Subhash for playing their characters well. It is heartening to see Kartik stepping out of his comfort zone of being a romantic hero. His character is forever in a dilemma between morality, success, and the limelight. He reflects the hypocrisy of Arjun Pathak when he transitions through his key phrase: Jo Kahunga Sach Kahunga (Whatever I say, it will be true).

Ankita Subhash disguises themself as the vicious and manipulative head of a channel who reminds his staff: We are not doing journalism. We are in the business of news! Mrunal Thakur (who has been credited in the role as a special appearance!) pays her due in screen-time - which is nothing short of dismissive. She holds onto her character as a righteous and ethical journalist.

Director Ram Madhvani, who has also co-written the screenplay with Puneet Sharma, portrays what's wrong with the media business. However, there are serious plot holes in this effort that have been overlooked. How do terrorists get access to Sea Link and other places? Despite the opponent being a chemical explosives expert, the author also seems to be confused by the types of explosives. As a thriller, the film scores on the story but loosens its grip as it progresses. The story of the story will force viewers to draw comparisons to A Wednesday. It's a tough challenge to beat.

In short, the film is suitable for those who like the thriller genre without questioning the holes of the 'plot'.

Vicky-Katrina's Wedding Can Be Seen On OTT Platform, 100 Crores Offer...

Meet The Changemaker Who Is Introducing Tech-Driven Education In Government...