Surprising wedding of singer Neha Kakkar and Rohanpreet Singh is on extreme catastrophe. Recently, she shared her adoring haldi and mehndi pictures with Rohanpreet Singh on her Instagram account. 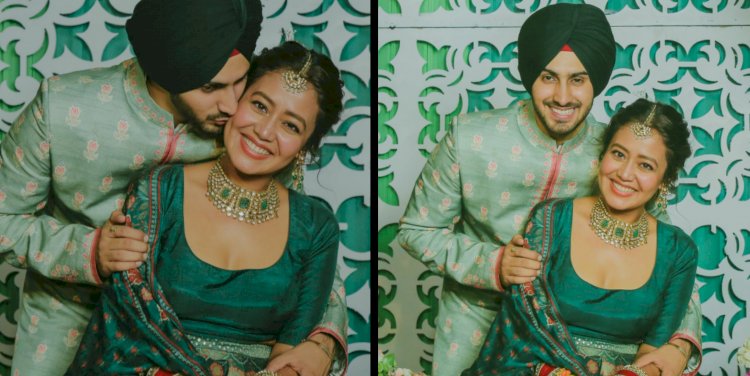 The surprising wedding of singer Neha Kakkar and Rohanpreet Singh is on extreme catastrophe. Recently, she shared her adoring haldi and mehndi pictures with Rohanpreet Singh on her Instagram account. Both are looking so adoring together, their fans are sharing lots of love by wishing them good wishes for the day. Neha shared many pictures of her beautiful mehndi picture with the name of ROHAN on her ring finger. Their matched outfits are so perfect, putting together as a "made for each other" couple. During every ritual of the ceremony, they turned on the same frequency, which depicts these love birds more adorable. Earlier, on October 9, Neha had announced her relationship with Rohanpreet through her social media accounts. She had shared a photo, with a caption,  "You’re Mine @rohanpreetsingh ♥️ #NehuPreet” (Photo: Neha Kakkar/Instagram).

Being on the same professional cord, Singer Rohanpreet began his career with the reality show Sa Re Ga Ma Pa Lil Champs in 2007. He was a runner-up of the show and was also seen in Sa Re Ga Ma Pa Mega Challenge two years later. Neha and Rohanpreet tied the knot in Delhi today. They will soon leave for Punjab for a grand reception.

How Auto-Driver Daughter Wins Crown Of Being Miss India Runner Up 2020?