Inspiration For Women Who Wish To Pursue Their Dreams - Suchi Mukherjee Founder-Chairperson Of LimeRoad.com

Suchi Mukherjee, a 42-year old woman, is currently the founder-chairperson of LimeRoad.com – a portal that specially caters to the womenfolk, providing them a fun-filled way to discover, share, and shop lifestyle products. 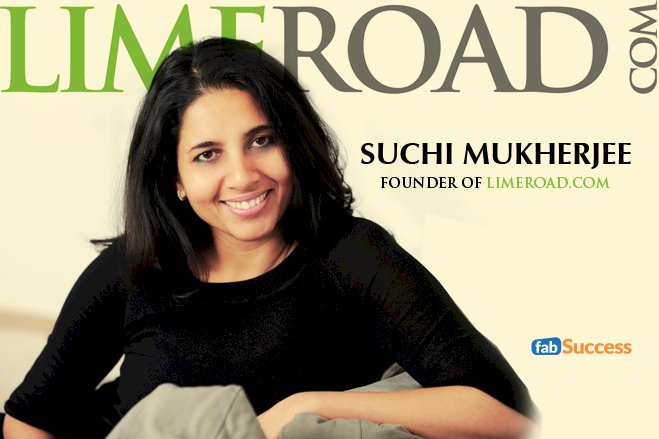 Born and brought up in Haryana, India, Suchi was always a dream child. She completed her Bachelor in Arts with a specialization in Economics and Mathematics from the University of Cambridge and further pursued Masters in Finance & Economics from the London School of Economics.

Suchi was, from the very starting, a very bold personality who never backed down from any and every challenge thrown at her by life. She was and is, actually a very focused and detrimental woman who with her vision and great thinking skills has emerged up to the leading name in the name of innovation and e-commerce and stands tall as an Inspiring figure for all the womenfolk.

Being a married woman with two kids in the frame, Suchi has established herself despite all the harsh challenges and come good on all terms; she has been able to achieve things many can only dream of and has become an inspiration for women who wish to pursue their dreams and work for a change. Suchi began working right after completing her masters. She joined Lehman Brothers Inc as her very first company in July 1998. She was appointed the Senior Associate for Corporate Finance. Suchi continued working for Lehman Brothers Inc for more than five years, focusing on sectors like Telecom Media Technology and Financial Institutions.

After gaining the much-needed experience and some valuable knowledge, Suchi decided to part ways with her first company and move on in life and in 2003, joined “Virgin Media” as their “Director for Change & Business Management.” She was also a member of the company’s “Consumer Division Management Team.”

After she gained the desired knowledge, she decided to move elsewhere to grab onto the opportunities that were yet to be opened and in June 2003. She joined “Virgin Media” as a Director for Change & Business Development. She was also a member of their Consumer Division Management Team. Suchi worked with this firm for about two years before leaving for eBay – making it one of the wisest decisions she ever took in her life. This jump not only gave her a rise in ambitions and stature but also gave her the much-needed breakthrough in life.

She joined the company first as the Head of Business Seller Programs & CS in 2006 and was also a member of the UK Operating Management Team as well. This way she grew and became privy to first-hand knowledge of the how-tos of business. With sheer hard work combined with immense talent and a truckload of winning performances to back it up, Suchi got promoted within a year as the Director and Member of Executive Management Team for ‘Skype’, which was in fact a part of eBay, back in the day.

This marked a new learning curve for Suchi, altogether. She now headed the planning, product/UI design, payments, and marketing (including brand, channels, incl. PR, and CS) departments. Suchi learned a lot of powerful leadership development skills as a part of the Executive Management Team which have helped her shape her career since. Working for ‘Skype’, she got the extravagant opportunity of witnessing the transition of a start-up into becoming a worldwide phenomenon! After devoting almost two years of her life while shaping ‘Skype’, Suchi once again hit the accelerator as she got promoted as the Managing Director of ‘Gumtree’, which again, was a part of eBay back then.

Gumtree was again like a baby (start-up) brought into the able hands of Suchi, in expectation of something big, something dramatic – filled with high aspirations. Rightly so, Suchi stood up to the opportunity and grabbed it with both hands as that baby, with the able guidance of Suchi, was turned into a heart-pumping success in no time.

With the sensational leadership of Suchi, Gumtree went on to become UK’s largest horizontal classifieds business in a mere two years' time! She lifted the company on her able shoulders and took them from the No.3 position to the numero-uno position in jobs and consumer-to-consumer car sales, growing the visits by 35% YOY.

Once she was finished, Suchi moved on and set to pursue a road on her own.

Having worked with the biggest of names in the industry and establishing herself as an epitome of workmanship and ideal example of a Great Leader, Suchi still felt a void in her somewhere – even after accomplishing things, some cannot even dream of dreaming!

She was desperately in search of a solution to satisfy her inner desires, something that could fill the emptiness in her heart and also help society in filling its own gap; so, she built LimeRoad.com!

LimeRoad is basically a cross-platform portal especially designed for women that combine the unique aspect of social networking with online shopping. This way, it makes a fun-filling ride for its audiences as they share and express what they like with a community that shares the same interests, making it unique in its way. What’s so unique about LimeRoad is that it offers 100% user-generated content that is created by the “scrapbooking community” and is fully exclusive to LimeRoad. In simpler words, all the products that are available on the site are manufactured by the users themselves known as the – Scrapbook Community. This way, people can choose, share, and create unique styles and looks making them truly, a stylist!

Suchi actually came up with the whole idea of LimeRoad, out of utter frustration! One fine day, she was reading some random magazine in London when she witnessed an article on jewelry on some page to her liking. She wanted to buy it, but since it was from some small store in Mumbai, it would have taken it a hell long time to reach her!

That’s when the idea really struck her. She realized two very important things that day which made a plausible change in her thinking. The first one is that there was apparently no consumer technology that would allow the users to explore products easily yet entertainingly. And secondly, and most importantly as well, there existed no such platform via which one could obtain access to the database of items being manufacture and shipped outside of India which is one of the leading manufacturing hubs in the world!

So, Suchi set out to build a juncture where one could find affordable yet extravagant lifestyle products in an easy-to-use interface. Being a woman herself, she understood the needs of womankind and presented them with a unique and sumptuous solution to their lifestyle needs.

Once she had her priorities sorted out, she headed to India. Here, she met her friend Ankush Mehra (Head of Supply Chain – Reliance Hypermarket) to understand fully the dos and don’ts of doing business in India – appointing him as one of his first co-founders. She then set out to meet Prashant Malik (Ex-Facebook, Microsoft & Siemens employee), someone who wanted to build something and had flown down to India after 17 years for this purpose alone, who joined in as the next ‘nerd’ co-founder of the company. The portal that was born out of Suchi Mukherjee’s sheer frustration became a cult phenomenon in no time. Women, from all kinds of backgrounds, started filling in, giving LimeRoad the much-needed road to success. From 250,000+ units of user-generated content per month and 600+ vendors to posting 200,000+ unique products per month by the users and becoming India’s leading portal for lifestyle with over 18 million products – LimeRoad has seen it all and that too in such a short span of time!

LimeRoad has provided a platform for numerous new brands, out of which almost half were exclusive to their website. Some of the most recognizable and flagship brands from the national and international circuits alike have found a home in LimeRoad. Mega Brands like – 5elements, Anuva, Desi Weaves, Kshitij, Allen Solly, Forever 16, Trendz, Vedas, Fuchsia, and a lot many more!

LimeRoad’s revenue model is actually very simple. They make money from the products that a vendor sells on their site in the form of “Commission Revenue”. Thus, making a profit on each product and providing smiles to every buyer who invests in these products. They also built a strong selection of brands along with the categories to put them in (like – apparel accessories, home, food, and many more) to help womankind venture out simply sitting at home!

They recently launched their official Android Application, which got about 100,000+ downloads in quick time with users returning seven times/month. Also, the mobile accounts for up to 60% of users and revenue as well. In light of recent developments, their revenues also doubled in the last four months with zero marketing strategies!

The Challenges that could have brought them down

Like every start-up the making; LimeRoad too had to face their share of challenges, during their initial stages, which could have led to a fall but thankfully didn’t. Though these challenges weren’t that major, when heading for an entire business set-up, they could have become pitfalls in this joy-filled ride.

Building a team of highly-skilled professionals who featured a can-do attitude presented a daunting task to the team of LimeRoad in the very beginning. Although this problem was overcome eventually, every now and then, it tended to pop up!

Another thing that hurt them like the Achilles heel was to find a suitable infrastructure with high-speed internet connectivity. Other than these minor issues, complex banking processes, registration with the RoC (Registrar of Companies) and other legal formalities were some minute things that presented some difficulties as they were totally different from what they had thought them to be. Along with an ever-strengthening team of about 200+ IITians and NIFT designers, LimeRoad stands tall with 1.5 million scrapbooks posted by its users so far, and about 100,000+ scrapbooks made and posted on a daily basis. The Gross Merchandise Value (GMV) of the company has grown by a gigantic 600% since its inception.

In terms of funding, the company has raised about a nerve-wracking $50 Million from Tiger Global, Lightspeed Venture Partners, Matrix Partners India, and some others. Their most recent funding includes the series C round of $30 Million, before which they had raised about $15 Million and $5 Million, in series B & A respectively.

Essential Skin Care Products Over The Counter Products That Must Deserve...

Mind Blowing Benefits Of Green Tea For Your Face