An intriguing story of the founder of Café Positive, asia’s first cafe to be run by HIV- positive teenager.

Kallol Ghosh, a man of compassion and a golden heart, has been working for the children welfare for years. He has recently started Café Positive- Asia’s first cafe run only by HIV Positive youngsters. 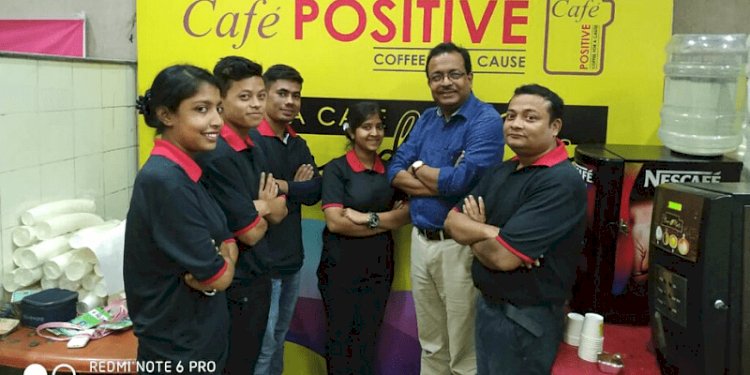 Kallol Ghosh, a man of compassion and a golden heart has been working for the children's welfare for years. He has recently started Café Positive, Asia’s first cafe run by HIV Positive young adults.

This initiative is to ensure inclusivity in the work culture as well as a living for all the abandoned HIV- positive teenagers. The initiative is positively appraised. It is believed that it will help to draw away the stigma prevailing in society surrounding HIV infected people.

Founder Kallol Ghosh told Hindustan Times, “The HIV-positive people will only maintain accounts, serve customers and clean tables. The kitchen will have hired cooks. It will also have glass walls so that customers can have a clear view of how food and beverages are being prepared. Moreover, only disposable utensils will be used in Café- Positive.”

Mr. Ghosh has dedicated his life to ensure a better future for underprivileged children and has contributed a lot to rescue them from the world of poverty, illness, dependency, and ill fate.

He had successfully established the Organisation for an NGO providing healthcare, education, and moral support. It initially started with only 3 children and has gone up to 5000, as few good people came forward to support these marginally aligned children. Offer is also providing the teenagers working in Cafè Positive with accommodation and other basic necessities. How It All Began?

Down the line, social service has always allured Kallol, at a young age he and his friends had set up home at Baranagar to provide shelter to kids rescued from railway platforms or the streets by police or NGOs. He became engaged as a National Service Volunteer, NYK, Ministry of Human Resources Development, and Government of India in the year 1988. He had also joined the United Nations as a Volunteer and was posted in Nepal for two years. Ghosh worked with UNICEF and initiated activities concerning Child Rights during the year 2000-2003. He came up with many initiatives and campaigns supporting HIV/AIDS infected children.

Kallol has a strong belief that upliftment of the society can be ensured by looking after the children of the society who hold the future. He has worked with all his heart to ensure the health and educational support necessary to maximize and bring the potential to lead a socially inclusive and relevant life. The report says, An estimated 1.7 million children aged 0-14 were living with HIV at the end of 2018, and 1,60,000 children were newly infected. Without access to testing and treatment, 50% of children with HIV will die by the age of 2, and 80% will not live to their fifth birthday.

It takes a big heart to serve the society without expecting any reward in return. Kallol Ghosh is an inspiration for all & has played a magnificent role in the lives of many, who were left uncared by their families. He was also bestowed with ‘True Legends Awards’ for his contribution to the social service.

Abraham Lincoln once said, “it's not the years in your life that count. It’s the life in your years”. Mr. Ghosh seems to be truly living his life by losing himself in the service of others.

How 18 Year Old Boy Turns His Family Ordinary Business Into A Company...