Kiran Mazumdar Shaw, a notable name in the pharma network, views herself as an ' Accidental Businesswoman'. From plans of seeking after a profession in preparing to turn into the administrator and overseeing chief of India's driving biotechnology firm Biocon, Shaw's excursion has been nothing not exactly a motivation to youthful business visionaries. 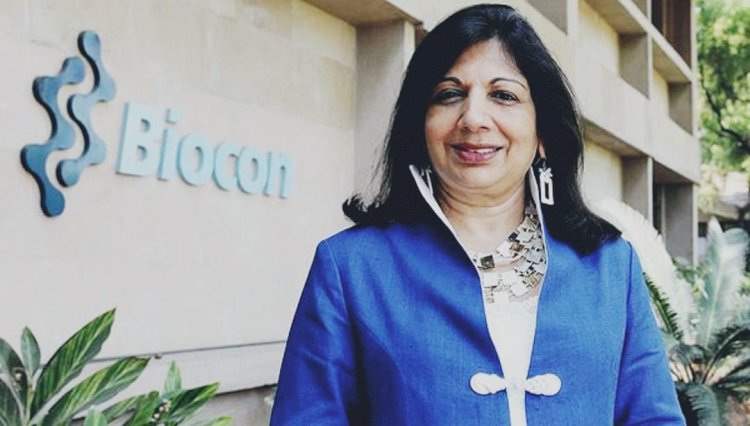 Kiran Mazumdar, born in a Gujarati family in Bangalore, is an entrepreneurial genius who has been an inspiration and has revolutionized the scope of biotechnology in India. Her company Biocon is the largest biotechnology company in India with a net worth of $1.2 Billion. She is the 81st richest Indian and the 92nd most powerful woman in the world.

Other than being a businesswoman, she is the first female chairperson of IIM Bangalore and is also an honorary member of the prime minister’s a trade and industry council in India, the US-India CEO forum, a member of the governing council of the ministry of corporate affairs, the national foundation for corporate governance and an active member of the union commerce ministry- instituted committee. Kiran plays a vital role in a large number of organizations for the betterment of the nation as a whole.

Kiran completed her schooling at the Bishop Cotton girl’s high school in Bangalore and got a bachelor’s degree in zoology from Mount Carmel College. Her aim was to go to medical school, however, that dream was faltered when she failed to get a scholarship. Her father Rasendra Mazumdar, was the head brewmaster at United Breweries and suggested that she should study the fermentation scene. Kiran listened to this advice and joined the Ballarat College of advanced education in Australia to study Malting and Brewing, being the only woman at the time in the course. Following her degree, she started her career by working as a trainee brewer in Carlton and United Breweries, Melbourne. Failing to land a good job in the brewing industry in India, she started looking for jobs abroad and was finally offered a good post in Scotland. However, just before Kiran was about to make the move to Scotland, she met Leslie Auchincloss– founder of Biocon Biochemicals Limited, of Cork, Ireland; and the rest as they say is history.

The beginning of Biocon India

Auchincloss’s Biocon was responsible for the production of enzymes for brewing, packaging, and textile industries. At the time, Auchincloss wanted to expand Biocon to India but due to the strict FDI laws of the time, any foreign company couldn’t own more than 30% of it in India. Hence there was a need for an Indian entrepreneur and Kiran was chosen as the potential partner, hence, despite being a joint venture Kiran owned 70% of the Subsidiary company.

She took the job on the condition of being offered the Master brewer post if she didn’t wish to continue after six months and to learn the business in detail, she worked as a Trainee Manager at Biocon Biochemicals Limited, of Cork, Ireland for a brief period of time and after returning to India, Kiran with a seed capital of Rs. 10,000 started Biocon India in 1978, in the garage of her rented house in Bangalore.

She faced various challenges due to her gender, age, and untested and inexperienced business model. Banks were not keen on giving loans without a guarantee or guarantor. Recruitment was also an issue because startup companies were a rarity that no qualified professionals were willing to work for. Along with these, poor infrastructure, power, poor quality of water, low-quality equipment, and workers without advanced scientific skills were also challenges that only delayed the success of the giant that is Biocon India.

The establishment of a juggernaut Overcoming all the challenges, within a year of its inception, Biocon India became the first company in India to be able to manufacture enzymes and export them to the United States and Europe. The earnings of the first year were used to buy a 20 acre property for the aim of further expansion.

Till 1983, Biocon followed protocols of the Irish parent company but soon after, Kiran transformed Biocon into a fully integrated biopharmaceutical company with a focus on research in the fields of diabetes, oncology, and auto-immune diseases. In the year 1987; ICICI Ventures supported the company with a fund of $250,000. This is when Biocon got a chance to expand its research and development efforts to new heights.

The following events saw the fate of Biocon change making it the giant that it is today.

Biocon became the second Indian company to cross the $1 billion mark on the first day of listing by closing with a market value of $1.11 billion and soon after it went public; the company’s revenue went straight up from Rs. 70 crore in 1998 to Rs. 500 crore.

Today Biocon limited is a Bombay stock exchange listed company that manufactures generic active pharmaceutical ingredients and sells them in the markets of the USA and Europe. It also manufactures biosimilar Insulins and sells them domestically in India in both bulk and formulation forms as branded formulations. Its 4 four main therapeutic areas are diabetes, cardiology, nephrology, and oncology.

Apart from biotechnology, Biocon has a Corporate social responsibility wing that makes sure that the company gives back to the community and ensures better sanitation and medical services for the masses. Following are some of the many ventures undertaken by this wing- Joint ventures and other investments

Unlike any Indian pharmacological company Biocon has directed 8% of its revenue back into research & development and has filed more than 950 patent applications and has entered into many high-value R&D licensing and other deals between 2005 and 2010.

Biocon entered into a strategic partnership to co-develop an exclusive new class of immunoconjugates with the United States-based IATRICa as a part of their continuous search for bettering research options.

Sizzling & Captivating Poonam Singh Built a Special Empire For Herself...

Nationwide Farmers’ Strike Today - All About Bharat Bandh That You Need...

Third Wave Will Not Come, Corona Will Become Like A Common Cold And Cough:...