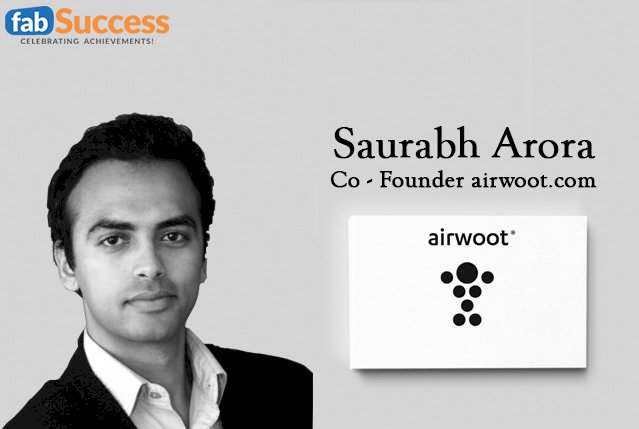 Saurabh Arora, a Delhi-ite, and a dropout of the doctoral program, founder of Airwoot, perfectly describes the youth of the nation. He is quickly climbing the stairs of success and the business market is talking about his extra ordinary capability of providing customer service.

He has completed his B-Tech in IT and M.S in Security & Mobile Computing from Maharishi Dayanand University, KTH Royal Institute of Technology & Danmarks Tekniske Universitet respectively.

His latest work- Airwoot; is an intelligent social customer service helpdesk which helps in finding experiences of the customers through social media platforms like facebook, twitter, etc.

As almost every other leading entrepreneur, Saurabh has also had his share of hard work. He has an amazing portfolio which includes a work experience everyone dreams off.

In January 2006; Saurabh started-off as a Research Intern at ‘Politecnico di Torino’ in Italy and continued there for almost seven months. While at it; his primary responsibilities were to handle policy based framework for security tools, ISMB Research lab, creating a key management infrastructure to build the enablement of the trusted components and PKI needed in trusted computing platforms.

After seven months of learning, he again got a shot as a Research Assistant at the Macquarie University in Australia in February 2007. Here he was handed the job of handling the trusted remote attestation project along with the INSS Research lab; to add to that, he also acted as an advisor to Prof. Vijay Varadharajan.

After seven months of rigid hard work and intake of knowledge; in October 2007, he finally got a new opportunity. Although he still acted as the Research Assistant, for the next 2 years, he moved to several countries like Sweden, Singapore or Denmark and successfully showed his talent. He worked for institutions like Swedish Institute of Computer Science, Institute for Infocomm Research and Technical University of Denmark.

Saurabh took a very bold step and added couple more tasks to his present work. Firstly, he entered the Hasso-Plattner-Institute in Germany as a Doctoral Researcher to pursue his PhD in February 2010. His primary topics included Internet Technology and systems group, wherein he covered multiple projects such as SecDMO: Secure data Management and Outsourcing Architecture, BSIMetrik: assigned by BSI for the Measurement framework to assess security compliance of service-oriented architectures, etc. and was also the advisor to Prof. Christoph Meinel.

In November 2010 he Co-Founded Filterly. It was a platform that provided a stage to filter over the information overload in a user’s social networks. But due to some unknown losses and difficulties Saurabh wrapped up his first venture and took everyone by shock when he dropped out of his Doctoral Program. But as we say everything happens for good so after a few months Saurabh came up with an amazing idea– Airwoot.

His success story is something that will inspire a lot of people- a Delhi-ite who wanted to do something big in his life and proved himself worthy by becoming the co-founder of the most trusted company of its kind.

With employee strength of 10 members, the firm is estimated to have an annual revenue of $10 Million.

Saurabh and team covering Facebook, Twitter and Google Plus; solve multi-disciplinary challenges in artificial and business intelligence, large scale data analysis and user experience. They do so by listening to millions of social media conversations and apply learning algorithms to separate the clutter from the actionable conversations in real-time.

Other than that, Airwoot also does a lot of analytics on the performance side wherein, companies can view how their team is performing and set social goals on Airwoot.

Their story dates back to 2008. Saurabh Arora and Prabhat Saraswat were pursuing their masters and PhD. at Technical University of Denmark. One fine day, they met & became friends and figured that they had many common interests like art, music and far more importantly – the power of ideas!

Eventually, the course ended and both of them took different paths. Although, they were on and off in touch but nothing big was seen to be happen, until all of a sudden, both of them dropped out of their PhD’s and returned to India.

They happened to bump into each other, while they were attending a few hackathons from November 2011 to February 2012. That is when both sat down to brain storm together which eventually led to the creation of – MemeticLabs.

At MemeticLabs, Saurabh & Prabhat together implemented a couple of ideas, such as:

While they were at it, they realized that the ratio of consumers complaining about the product was far more than those accepting and endorsing it. That’s when they shifted their focus to figuring out how companies or brands were responding to such complaints. And that’s when they gave birth to “Barometer”

They believed that, the behavior, mindset & approach of the consumer was drastically shifting towards social media, as it became more and more popular in terms of reactions and interactions with the brands.

Initially, they started tracking 35 most active international brands on Twitter where their info graphic was created on the sentiments & the analytics engine of Memetic Labs and, the visual was designed by Nth Loop with the help of handcrafted illustrations & data-intensive JavaScript libraries.

The Barometer that they released listened to the conversations between brands and their customers on twitter and analyzed the brand’s key social performance indicators and gave deep insights on how they performed on twitter. These results were self explanatory and comprehensive.

Now that they were doing pretty well they wanted to expand their venture but money was still an issue for them, so they decided to get-in external funding. Within no time, they got shelter at ‘The Morpheus’ – a Chandigarh based accelerator. The accelerator chipped in INR 5 lakhs which gave them more time to develop the product and undergo the beta test.

As soon as, they finished their accelerator program with The Morpheus, Airwoot got an undisclosed funding from KAE Capital and prominent angel investors like Rajan Anandan (Managing Director, Google India), Sunil Kalra and many others.

Today; Airwoot has brands signing up and paying on a monthly basis for using their product. Some of these brands include the most prestigious companies of the Indian Corporate world such as Jabong.com, MakeMyTrip, Snapdeal, Jet Airways, PayTM and many more.

Saurabh Arora’s biggest achievement is worldwide appreciation of his company for being the most trusted, reliable and leading company of its kind. Many more feathers are still to be added to his hat.

He is a remarkable personality and a name that shall be an inspiration to the youth of the nation.

FROM A MIDDLE CLASS TO CFO OF INFOSYS - MOHANDAS PAI

Manage Your Stress, Know How?

Soon Microsoft Going To Launch Windows 11 - Know Everything In detail