Top Secret Behind The Spectacular Rise Of Sustainable Urbanization - Commonfloor

CommonFloor was launched in 2007 by the trio Sumit Jain, CEO, Lalit Mangal, CTO, and Vikas Malpani, VP- communities when they themselves faced a problem. These three came to Bangalore and couldn’t find the right property. After searching they found something to their satisfaction, but many issues like sewage problems cropped up. The problem was not getting solved because the society members did not know each other and they did not have any sort of coordination to arrive at a conclusion. Acquainted with these problems the trio thought of finding a solution to it. 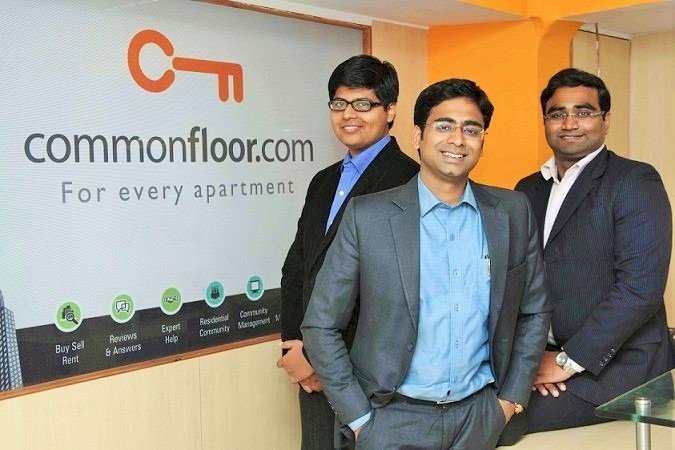 The trio built CommonFloor as a solution to the problem they faced which could help the society too. Initially, they started with INR 1 lakh each from their savings with the intention of addressing users’ residential requirements including searching an apartment, assisting interactions within residential communities, and linking people to appropriate and relevant service providers. They had to change plans a lot of times before they reached the desired success as things didn’t work out as smoothly as expected. It was difficult to attract the users to their site who were comfortable using other portals which offered a standard directory service. They started off with INR 10,000 each month for the site for a year and increased the budget to INR 30,000 to do something different and interactive.

They made a lot of changes to the current model to manage the increase in the budget. They changed their site and marketing strategy to a cheaper one. They even developed Facebook applications for companies and gave speeches at conferences to earn a little extra.  Just through word of mouth within 6 months, they managed to bring in a client base of 700 societies. In mid-2008 they got an opportunity to get associated with The Morpheus, a start-up accelerator for a 4-month program. With the help of this program, they were able to redefine their business model by changing it from a closed group to an open forum that is they made it public. Within a year their team of 3 grew to 30 when they took a major leap by accepting venture funds from Accel Partners in 2009. With these funds, they rented a small office in Bangalore and shaped the exterior of their office. They gained a huge user-base in a short time and in return helped them gain a good amount of revenue because they had created communities between individuals and societies.

They were gaining popularity and in 2009 they had 50,000 communities listed with the site constituting more than 25 lakh homes and opened offices in Delhi-NCR, Mumbai, Chennai, Hyderabad, Pune, and Bangalore. They raised funds and improved their portal. They added on to their existing deliverables by providing information about upcoming projects from various builders and also started listing brokers and builders profile for a more detailed viewpoint.

To cope up with the changing needs and technology they launched a new a map-based search feature for property buying and renting integrated with Google Maps. CommonFloor also launched its Mobile App for seekers in March 2013, to provide the facility of searching properties within a range of 2.5 km.

The company kept growing with approximate staffing of 400 members and their revenues increased five times by FY13 making it INR 10 crores. It had 60,000 housing societies listed on its apartment management platform which constituted more than 50 lakh homes. On July 4, 2013, they raised funds from their existing investor worth USD 7.5 million with an expectation to reach USD 25 million in revenues in a couple of years. The growth rate was 106.3% YoY, according to ComScore, making it the third-largest real estate portal in the country. It didn’t stop here; in 2014 CommonFloor launched its first-ever “Apartment Management Software” with which they provided apartment communities across the country better communication through interest groups, management, and coordination amongst residents and owners. It also sent them notices from RWA (Residents’ Welfare Association) directly on their phones and e-mails and also provide the details of vendors like plumbers, electricians, etc. It was now offering a complete package deal for the common man making their site even beneficial by offering usage of integrated payment gateway service.

In 2014, they managed to raise another round of funding worth USD 10.4 million from their existing investors. The portal covers nearly 400,000 active listings, 100,000 communities in 120 towns and cities which include Chandigarh, Indore, Jaipur, Lucknow, Ahmedabad, Nagpur, Mumbai, Kochi, Coimbatore, Mysore, Mangalore, etc besides Bangalore, Mumbai, Noida, Gurgaon, Chennai, Hyderabad and Pune after completing a long journey of 7 years.

CommonFloor ranked first in a startup the ranking by Alexa. CommonFloor is listed in the top 33 startups by Tech in Asia. CommonFloor.com has been conferred with the title ‘Best Brand and Creator Collaboration 2014’ by Google.

Major Difference Between How The Restaurants Are Runned In The U.S. And...

Bhopal-Based Bistar Hostels Has Taken An Eccentric Course To Advance Nearby...

IPL 2020: MS Dhoni's aspirations of "command The Roost" are in the UAE