The PM Modi’s SVAMITVA scheme(Survey of Villages and Mapping with Improvised Technology in Village areas) was aimed at one of such issues faced by the village people. 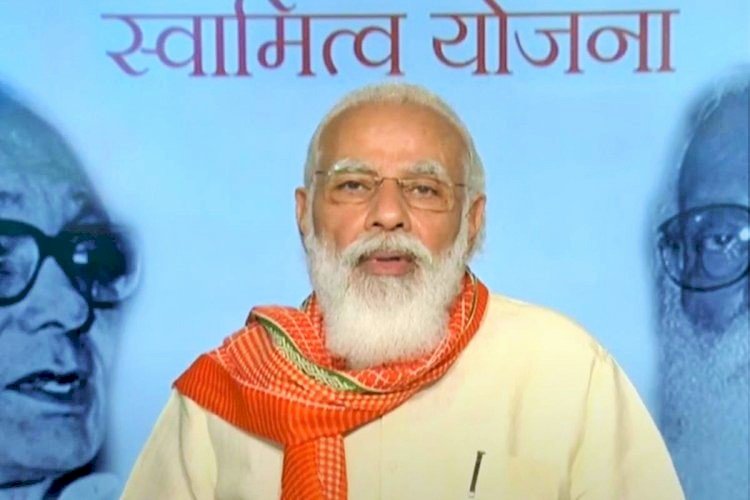 The country is taking small but important steps to provide support and confidence in the hearts of the people especially those living in villages. The PM Modi’s SVAMITVA scheme(Survey of Villages and Mapping with Improvised Technology in Village areas) was aimed at one of such issues faced by the village people. Many of the villagers had no proof of their properties and their ownership. So this Sunday Prime Minister Narendra Modi launched the physical distribution of Property cards under the SVAMITA scheme via video conferencing.

The launch provided property cards to around one lakh property holder through SMS links that were delivered on their mobile phones. This was done during the video conferencing where the PM also interacted with many of the beneficiaries. The Union Minister for Panchayati Raj was also present in the meeting.

PM Modi said in his speech that India is taking decisive steps in the AtmaNirbhar Bharat direction. These ownership cards will help many people to be confident and feel self-reliant as they would have proof of their ownerships with them. Now that people have a legal document to prove that they own their house. It will bring a phenomenal change in the villages of our country. PM Modi congratulated all the people who have received and downloaded their property cards. PM Modi also slammed the opposition for trying to “stall development” in his speech. He attacked the opposition for criticizing the farm laws and other issues. He said the opposition was choosing a path of “uncouth language” and doing such things only to uphold its position as the opposition. The reforms made by this government are making those people uncomfortable who used to benefit from the middleman systems. PM Modi mentioned socialist icon Jaiprakash Narayan and Sangh stalwart Nanaji Deshmukh in his speech on the occasion and highlighted the contributions of these two leaders and said that he held their vision in the highest respect and close to his heart.

Dedicating the launch of the scheme to these esteemed leaders and legacies on the occasion of their birth anniversary, both of whom were adorned with Bharat Ratna, PM Modi said that the ultimate goal of all his works is empowerment, development, self- reliance, and support of the people especially the downtrodden and less privileged people of India. This scheme is certain to bring joy in the life of various people in India and a move that has been hailed by various political pundits of India.