Ashok Deshmane , who quits job of IT company to empower the deprived students and farmers

Ashok Deshmane empowered deprived children all along, he grew up in difficult circumstances. But, he did not let his spirit down. He funded his education, built a career for himself, and changed the path of his life for the better. 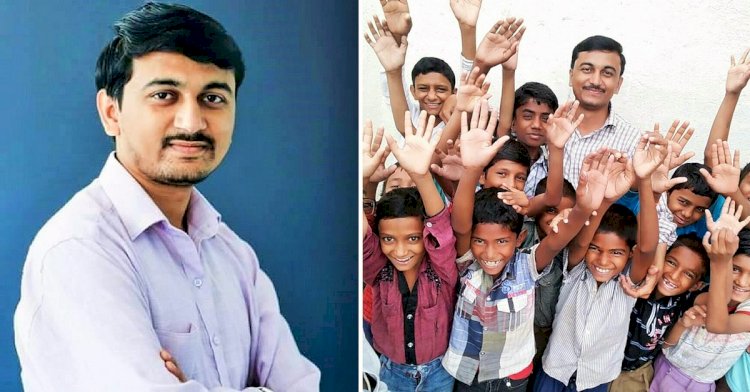 Ashok Deshmane empowered deprived children all along, he grew up in difficult circumstances. But, he did not let his spirit down. He funded his education, built a career for himself, and changed the path of his life for the better.

Ashok Deshmane was born in district Parbhani located in Maharashtra. Grown-up on unfertilized lands with hard rainfall, therefore he knew the struggles of sustaining in a drought. For his family whose source of livelihood was farming, obtaining 3-meals a day used to be a challenge. . After doing a few odd jobs, he managed to fund his higher education.

As time flown by, the young man realized that things had not changed. Poverty, inaccessibility to education and healthcare, dry spells, and farmer suicides were still plaguing people. According to an RTI document, over 15,000 farmers lost their lives to suicide in Maharashtra between 2013 and 2018.  Ashok was appalled when he found out about this horrible situation. He wanted to improve the lives of the residents of his hometown and bring about a transformation. For this reason, he quit his well-paying job as a software engineer at Mphasis and started working towards his plan. In 2015, the 30-year-old established a non-governmental organization called Snehwan to educate and provide for farmers’ children for free of cost. With the help of his savings and some financial aid from his friends, he got the kids enrolled at good schools and also rented out a space to accommodate them. Today, Snehwan supports over 50 children belonging to low-income farmer families in and around the district of Parbhani. “When a farmer is in distress or ends his life, a current of dread runs through his family, especially their kids. The mounting debt and harassment meted out by moneylenders disrupt their educational goals. When I got to know about the rising number of farmer suicides in and around my hometown, as well as the hardships experienced by their children, I was determined to help,” Ashok Deshmane, Founder of Snehhwan.

Ashok completed his Masters in Computer Science. He moved to Hyderabad to pursue a few certificate courses in software development. In 2012, he bagged a job at IT services company Wipro, later shifted to Mphasis. Since working out of the Pune office, he used to often visit his parents. However, when he went down to Parbhani in 2015, he heard about the suicide of a 32-year-old farmer. This determines him to initiating some great help to them.

He wanted to spend some time getting the paperwork in place and kicking off the initial operations of the NGO. Therefore, he opted for a night shift. He also used this time to conduct surveys across districts like Beed, Washim, Nanded, and Aurangabad to find out about the farmer suicides in the region, and identify the children who had dropped out of school. After 9 months of groundwork, one of Ashok’s friends agreed to rent out his old four-bedroom house in Bhosari, a locality situated in Pune. Without any delay, he put an all-out effort to refurbish the place in a way it could accommodate as many children as possible.

“Once the residential block was set up, I went about persuading the families of the farmers to send their kids to the shelter in Pune. It took a while for me to gain their confidence, but I ultimately succeeded. About 25 of them allowed their children to be a part of Snehwan,” he said.

In 2016, Ashok quit his job to dedicate all his time to the cause. He enrolled children, in nearby schools such as the Sharadchandra Vidyalaya and Navin Madhyamik Vidyalaya. He also began catering to their basic needs like food, healthcare, and clothing. Additionally, He began to offer extra-curricular activities after school. He roped in 4 volunteers and 6 teachers to conduct sessions on storytelling, sports, singing, painting, and public speaking. These activities boost the thinking abilities of kids, as well as enables them to gain confidence and communicate better. And, Ashok understood this very well.

“The average age of children at the shelter is anywhere between eight and 15 years. And, bringing out their hidden talent is of utmost importance at that juncture,” he said. In 2016, Ashok got married to Archana, who was more than happy to know about his work and contribution. She cooked meals regularly at the shelter.

“Education is a tool that enables people to step out of poverty. At any cost, I did not want the kids to be deprived of this due to their economic status. I am so glad to fill the gap,” he added

Dr. Ravinder Kulkarni, a renowned gynecologist in Pune, donated two acres of land to him to build a spacious shelter for the kids. He also started a crowdsourcing campaign on Milaap. He wanted to provide a good environment for all the children to learn and flourish. Hence, he arranged for the required resources to build a small computer lab and library within the shelter. He did not stop with that.

This Pet Startup In India Has Everything To Offer For Your Furry Friend...

A Comfortable Journey With appetizing Food on Rails- This Bihar-based...