Exciting Journey Of Earning Rs 200 Million From 5000/- Per Month

Whether it is a day of mourning or a time of celebration, flowers are an easy and effective way to tell someone you care about. Fresh flowers have the ability to double happiness and reduce pain. 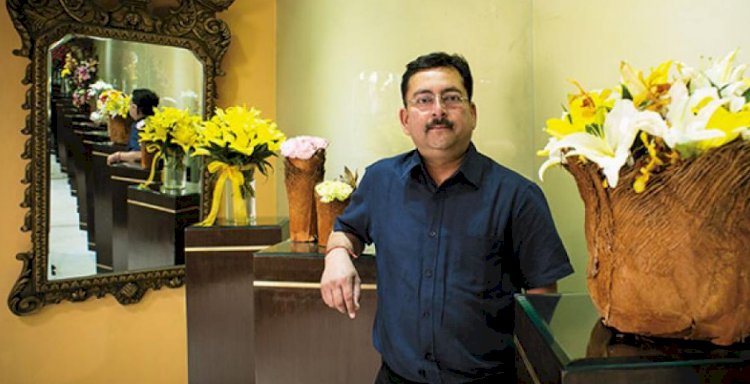 Vikaas Gutgutia from Bihar saw the prospect of doing business in small flower bouquets. Starting with only 5,000 rupees, Vikaas has created an internationally acclaimed brand, which has become a revolution in the horticulture industry in the country.

The horticulture industry in India is experiencing a growth rate of 30% per annum and is growing rapidly. According to India's oldest industrial organization, Assocham, the market capitalization of the industry will reach Rs 10 billion over the next few years. In a situation like this, we must appreciate the high expectations of this industry.

Today, we highlight the success of Gutguttia, the founder of the famous Ferns N Petals brand, who once entered the international market as a small florist.

Born into a middle-class family in a small town called Vidyasagar in eastern Bihar, he graduated from his local school and graduated from West Bengal. While he was reading, Vikas was helping his uncle at a flower shop. He learned the nuances of doing flower business from his uncle.

After graduating, he worked for two years. He also looked at business opportunities in Mumbai and Delhi and finally in 1994 opened the first air-conditioned flower shop in Delhi with a capital of 5,000 rupees. Although there was little progress in the flower business in India at the time, Vikaas continued to develop the trade. By the way, he found a partner who invested Rs 2.5 lakhs in this business. The partnership did not last long, however, as it could not wait long to make a profit. During this time, he continued to run the business by selling flowers.

Due to the small number of professional florists present in this disorganized sector, Vikaas emphasized development by providing better services, variations, and decorations with attractive flowers. His efforts to pay more attention to quality and development were the main reasons for his success. He got a big holiday when he got a contract to deliver flowers for a big wedding at the Taj Palace Hotel in Delhi. This opened up a new trade route for him. At the same time, it has further developed its business by expanding its product range. He also introduced chocolates, plush toys, cakes, and gift baskets, in addition to bouquets of flowers, which brought freshness to the company.

After doing business for almost 7 years, he planned to expand his retail business nationwide and began franchising his Ferns N Petals Boutique brand. For franchisees, it met the minimum criteria for 200-300 square meters of exhibition space and an investment of 10 to 12 million. With this investment, the company provides supplies of flowers, accessories, and gifts for the operation of the brand store, infrastructure support, design, and technical information, as well as floral decoration training. Today Ferns N Petals has 240 franchised stores in 93 cities including Chennai, Bangalore, Delhi, Mumbai, Coimbatore, Agra, and Allahabad. Not only that, Ferns N Petals is the largest flower and gift shop in India with an annual turnover of over Rs 200 million. Currently, it operates not only in India but has also become a global brand.

The younger generation can learn a lot from the Vikaas company, which is known as the largest entrepreneur in the field of selling flowers. When he started making flowers, it never occurred to him that one day he would be considered one of the most successful entrepreneurs in the country. His idea of ​​doing something new and going to bed made his work successful.

Complained Of Rape Was Filed Against Mithun Chakraborty’s Son At Mumbai...

Started Blogging From Bedroom To Having Millions of readers! Pete Has...