One will often hear many stories about people moving to big cities to chase their dreams, but there are some people who have the courage to find success in their hometowns while sticking to their roots. The founders of Sheetal Cool Products (SCPL) are on a mission to put their city - Amreli on the map. 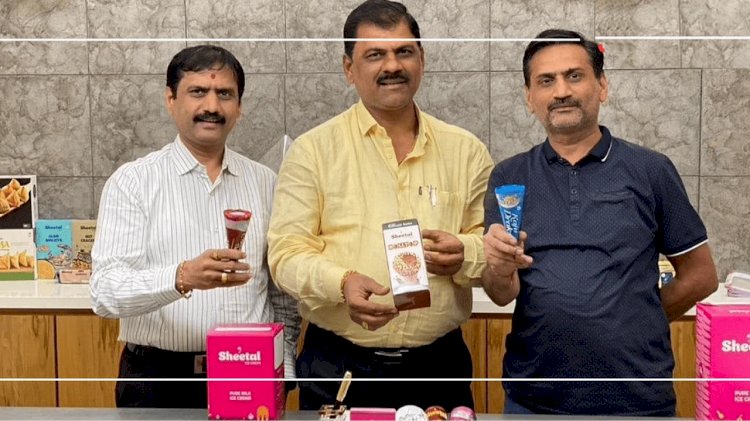 Yash Bhuva, executive head of SCPL based in Gujarat's Amreli, says, "This city has given us a lot, now it is time to give it back."

From being a paan shop in Gali to the creation of a publicly listed food manufacturing company that aims to generate Rs 300 crore business by the next financial year, SCPL has come a long way. The company is now trying to capture the entire Indian market from the Saurashtra region of Gujarat.

SCPL also manufactures ice cream, dairy products and namkeen among other food items. The state of Gujarat has now approved the company to set up 50 ice cream parlors in the region, the largest ever after Amul.

But how did SCPL turn its small shop into a profitable business? Yash says that this is because his father and uncle had created the company not as a proprietor but as a way of serving their society.

SCPL was born when Jagdish Bhuva took a new step in his life leaving the family agribusiness and started a paan and cold drink counter shop named Sheetal Paan & Cold Drinks in a street of Amreli in 1987. His younger brothers, Bhupat, Dinesh, and Sanjay soon joined him.

The family had only just started the business, and the local municipality demolished the shop in 1989 before they could set up their own enterprise.

For the Bhuva brothers, this small shop was the only source of their livelihood. After struggling for two years, in 1991, in front of the Amreli bus stand, arranged money and bought another small shop.

Yash told YourStory, “When my uncle and father set up this shop, a Janmashtami fair was also taking place in the city. Many vendors used to set up stalls there and sell well. He thought of capitalizing on this opportunity and selling ice cream there."

The brothers ordered homemade ice cream from a local vendor to sell at the fair. The response came beyond his expectation and this small step changed the course of life for him.

Yash explains, “After receiving such a positive response from the people, the founders decided to sell ice cream in their shop. Took one step towards another and the business grew so well that in 1998, we established our own ice cream production in the form of Shree Sheetal Industries.”

Unfortunately, Jagdish passed away in 1998, but his brothers carried on the legacy of his elder brother and in 2012, Shree Sheetal Industries turned into a limited entity.

The next year, Jagdish, Bhupat and Dinesh embarked on an ambitious project to deliver pure quality milk to the people of the Saurashtra region. This paved the way for his entry into the dairy segment. Thus, in 2013, SCPL started delivering FSSAI (Food Safety and Standards Authority of India) standard milk to the adjoining areas by sourcing milk from farmers of interior villages of Amreli and Gir district.

By 2015 and 2016, the company further diversified its product portfolio by introducing frozen foods, namkeens, and sweets and even started selling through its products outside Amreli.

Yash says, “Every diversification was the hard work and humble approach of my uncle and father, who believed in self-reliance.”

He says, “When my uncle and father started the ice cream unit, the power situation in the state was not good, which was the biggest challenge. The situation improved after the introduction of Jyoti Gram Yojana by the then CM Narendra Modi. We believed in a self-financing model."

The dedication, grit and perseverance of the founders made SCPL a publicly listed company in 2017. SCPL now has a strong distribution network of over 300 distributors in six different states and more than 35,000 retail outlets.

One of the key drivers of SCPL's growth, Yash believes that giving back to the community is the core value of the company.

He says, “SCPL strengthened the districts by directly procuring milk from the farmers of the inner villages. We have a workforce of over 1,500 people with over 800 women. We are empowering over 60 families to become self-reliant through Sheetal Cool Parlor and plan to double this number by the end of next year.”

Yash also told YourStory that SCPL has focused on backward and forward integration since its inception.

It has an in-house manufacturing facility of 30,000 corrugated boxes per day and fully company-owned logistics by over 55 referenced containers. The company has an in-house manufacturing capacity of one lakh biscuit cones and seven thousand liters of liquid chocolate per day. There are 1.5 and 1.25 MW-wind projects and 1.2 MW solar projects resulting in internal energy generation.

Challenges and Competition
SCPL is a regional brand that is paving its way in metro cities. The biggest challenge before the company is competition with giants like Amul, Mother Dairy, Vadilal, Havmor, etc.

Yash says that these companies are old brands and doing well. "We're still positioning ourselves and it's happening at our own pace."

SCPL has made its presence felt in Maharashtra. Yash claims that 20 percent of the company's total ice cream sales are generated from the state with a distribution network of over 50 distributors and growing at 25 percent CAGR (Compound Annual Growth Rate). It has also entered Rajasthan, Madhya Pradesh, Uttar Pradesh, Jammu and Kashmir, and other regions.

SCPL's Namkeen and Mithai are also available on the e-commerce marketplace.

SCPL has several expansion plans in place and aims to double its number of ice cream parlors by 2022, which will help generate more jobs in states like Maharashtra and Gujarat where the company is targeting to expand.

The company is also planning to foray into new categories, which Yash feels it is too early to talk about.

SCPL is an old family business that invests in people.

Yash says, “When we tell people that we are from Amreli, their second question is where is it? We want everyone to recognize our city and we aim for similar growth in our business."

Nadal and Djoko To Battle It Out At The Last Slam Of The Year!

Data Science And Cloud Based Platform SNOWFLAKE Is Enabling Firms To Mobilise...