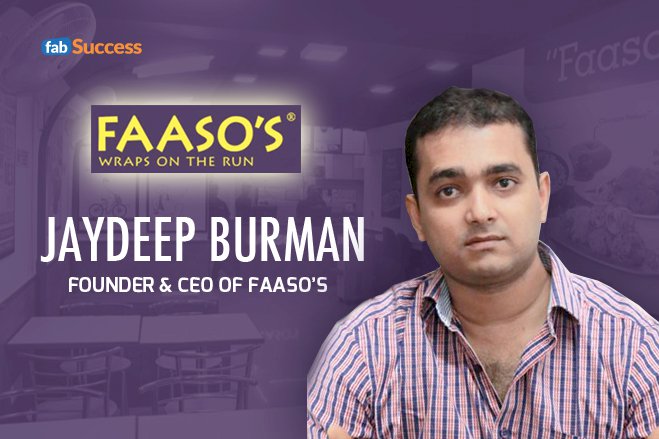 Their admirable efforts have allowed Faaso’s to become one of the leading companies in a short span of just eleven years. It has allowed itself to remain in India being the fastest and most trustworthy food brand here which is worthy of praise as well. Their food items vary from rice to wraps to gourmet dishes to starters and desserts.

Jaydeep, being very well-educated (a degree in production engineering from Jadavpur University, MBA from IIM-Lucknow and a degree from INSEAD, France for management program), busted the myth that to excel at entrepreneurship one ought not to have little or no education (People! Sigh.).

40 years of age today, he began his career soon after completing his MBA.

He started his career, as the Vice President for Brainvisa Technologies in the year 2000. Brainvisa being a start-up, worked there for at least 3 years and learned about the ways to manage a start-up and many problems faced by them over the course of years. It was during this time that Jaydeep began to think of establishing his own start-up and the very next year he founded Faaso’s – as a Part-time business along with his friend-cum-colleague – Mr. Kallol Banerjee.

At the time, when they were doing so, Jaydeep also moved his job in order to maximize the learning prospects as their new VP in 2004.

After completing their management program; the friendly duo instantly got an offer to work for “McKinsey & Co.” (a Consulting Firm in London) as their new Strategy Consultant.

The real reason for working at a consulting firm while having their own company – it was to gain some work experience and also to generate sufficient income from their present jobs. And finally, in 2010, they resumed their business.

Jaydeep had always wanted to do something of his own; he knew he was meant for a greater purpose than what he was doing now. He also realized that no matter where they went; food will always be a problem not for them but for everyone, going anywhere. Problems like what to eat, how to pay, and the delicious aroma of home food that brought about severe nostalgia raised many problems

When they went to the US, they encountered different food chains like Taco Bell, McDonald’s, Burger King, etc. But Indian food was nowhere to be seen or sans-served and as is obvious, owing to the delicious nature of Indian food, they dearly missed it.

They observed that food on the run was a much-loved thing over there, and longed to have something like that in India too that would deliver street fast food in an instant at one’s whim. So, he came up with the idea of Faaso’s. In 2004, they set-up the offices with an initial investment of just 8 lakh rupees.

Faaso’s or Fanatic Activism Against Substandard Occidental Shit opened its first outlet in Pune! It had an open kitchen with a glass facade, air conditioning, and all the sorts of stuff.

They began to bleed a hell of a lot of money and in due course, lost their due working capital for the entire year in a matter of just four months.

It was then that they decided to chop down on all the ill add-ons and focus on two primary things and that being – food, and service. Since then, Faaso’s began to climb up the ladders and into space! (not literally; but yeah, in space!)

Now once they witnessed that Faaso’s was starting to stabilize; both the co-founders left for INSEAD, France in 2005 to study further, and later went on to work at McKinsey & Co.

The business flourished under people who worked in Faaso’s from day one.

In a mere 14 months of time after their inauguration, the company surpasses its own cost, and additionally, Faaso’s expanded to 6 more outlets within a very short span of time.

By 2009, the company had begun to gain the desired impetus, and to keep it so, they required funds and investors. Hence, without further ado, Faaso’s raised funding of INR 50 lakhs from Lunia Investment & Finance Pvt. Ltd, which was followed by a loan of 1 crore from SIDBI.

In 2010, about 4 years later, while working with at McKinsey, the entrepreneurial bug bit them again, and after much thought, the duo took a one year vacation from their present jobs; came back to India and took the reigns of Faaso’s in their able hands.​

On their return, they saw the fruits of their labor and were convinced that if given a chance, Faaso’s could go on to become India s biggest fast food joint, and what’s more, it had a global perspective too! Hence, without wasting time any time, they began to amend things; things that might assist them in the expansion of their business.  Now, Faaso’s was active since 2004 but only after they came back, they organized Faaso’s as a private limited company.

In the few months following that, they turned Faaso’s upside down and gave it a whole new business model. Fixing every glitch and hitch, this took them up to 6 months. After that the response to Faaso’s was overwhelming. Social media giants like Facebook, Twitter were flooded with their praise and check-ins. Everybody wanted a piece and Faaso’s reached greater heights. In fact, they expanded from 6 outlets to 14 and had devised the plan to set up 15 more across various parts of the world.

In the following couple of years; they had

They started the franchise-route in 2012 with 6 stores in Pune but it was as you can say ill-timed, it turned out to be an enormous debacle.

The major reasons behind the fiasco were the constant clashes among the franchises and also owing to the fact that Faaso’s was not a big brand as of yet.

So they dropped the idea of franchising altogether and looked for a solution that was much more viable and didn’t result in a total letdown. (The 6 stores which started the franchising model still operate but under a different name –Eat some.)

Their failure was not to last as later on, Jaydeep came up with a dazzling idea for the ‘Entrepreneur in Residence’ program!

Basically under the ‘Entrepreneur in Residence’ program, they chose a select-few people with two-three years of post-MBA experience (not from the hotel industry); took them through the procedure of operating one of their outlets for some time, then later when they were ready – they were given the golden opportunity of taking control of the profit-and-loss responsibility of running 15-20 stores /  running a particular function like Marketing or HR/opening in new markets, among various other “cool” things! These people were given the same decision-making powers as Jaydeep and Kallol.

This initiative turned out to be a gigantic accomplishment and the company received more than two thousand applications in the first round itself! And as of today, they have lucratively completed two rounds of hiring! Who wouldn’t want to run their own store where they could pour in as many ideas as possible and all the while maintaining their uniqueness and independence of functioning? Brilliant! They grew like never before.

This was the story of a company that came back time and again to prove their mettle to everyone who doubted them; come back they did, and every time with flying colors and ravishing results! This was a fairytale and would continue to be so until the end of the line.