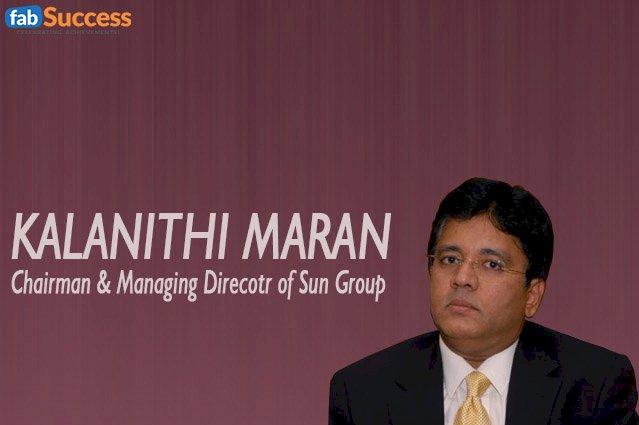 Born on 22th April 1993started Sun TV. In against a minority stake, he sold out a small stake to his Granduncle M Karunanidhi’s family but didn’t leave it like that and later on bought it as well. Maran didn’t have a large founding group but mostly his college friends forming a team of 25 people.

The next requirement for his team was to find a transponder and to get that he approached the man who started Zee TV, Mr.Subhash Chandra. He approached the man to ask him for an afternoon slot on their transponder. To his luck, a Junior Editor rejected his proposal saying the idea won’t work as few people watched Tamil shows and didn’t give him a chance to meet Subhash. Clearly the junior had wrong information as the four South Indian states of India accounts for one-fourth of the total population, and one-third of all homes owns TV. A setback like this did not demotivate him as he knew what he was doing was correct. After little efforts, he was able to find a transponder space from ATN and finally launched his channel.

Launching the channel was only the new start of a long and prosperous voyage for Kalanithi Maran.The state did not have cable operations in those days, and Kalanithi had to brainwash video shop owner’s to convert into cable operators. He eventually became the largest SCV (Sumangali Cable Vision) cable operator in the South as he became the man who never takes no for an answer.

He focused more on building his company than getting into the limelight. During the initial years of Sun Networks, the industry was dominated by the state broadcasters, so Sun TV started off with 3 hours of Tamil programs on ATN channel, and their brand name was Sun TV.

Was it always a smooth path?

On 23rd November 2003, Kalanithi’s father Murasoli Maran passed away. After his father’s death Karunanidhi, who was granduncle of Kalanithi offered him the DMK Party ticket for Chennai Central Lok Sabha constituency for the 2004 elections. But Kalanithi had his heart on his business and refused the offer. Later in 2006 Sun Group was listed on a stock exchange and raised around Rs. 600 Cr. for launching new TV and FM channels along with funding the construction of his new corporate office.

Now was the time when the real problems started to emerge. At the time of filing the IPO (Initial Public Offering), a letter to the Prime Minister was sent by a Member of the BJP Party raising questions about the conflict of interest with Mr.Dayanidhi Maran, Minister of Communication and Information Technology. During this period, it was assumed that Kalanithi’s career was over, but he knew this was not his time instead and waited for the right time.

His love for his business finally overpowered all the difficulties, and soon Sun Network emerged as a rising sun from the clouds. By the end of 2010, Kalanithi to bought 38% stake of SpiceJet Airlines from an American private equity investor and UK-based Kansagra family with a downpayment of Rs 750 Cr. In next few years, he invested Rs.800 Cr to increase his stake to 53% that others thought was a foolish step, but Kalanithi believed in what he was doing and later proved himself correct. His Airlines business ran with high profits for four years, but it went into a loss and Kalanithi was force to sell it as he already had faced enough loss.

5 Fun Adventures Worth Exploring In Goa For Solo Travellers