MediCAB, Foldable & Portable Hospital: Some Oxygen For India By IIT-M Startup Amidst Covid-19

Modulus Housing, a startup incubated at the Indian Institute of Technology Madras (IIT-M) has developed a portable hospital unit, MediCAB, a foldable ‘micro-hospital’ that consists of four zones – a doctor's room, an isolation room, a medical room/ward and a twin-bed ICU, maintained at negative pressure which can be installed anywhere within two hours by four people, as said by the IIT-M. 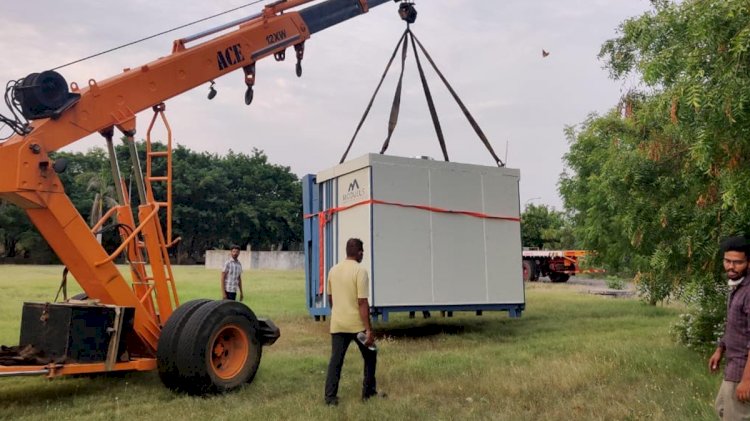 The condition of hospitals in India, especially the bed crisis both in urban and rural areas has brought a catastrophic effect to the Covid-19 situation. While the urban areas are mostly suffering from the bed crisis and the rural people are in lack of healthcare infrastructure, Modulus Housing, a start-up incubated at the Indian Institute of Technology, Madras (IIT-M) has come up with the idea of MediCAB, a portable and foldable hospital unit, that consists of four zones- a doctor's room, an isolation room, a medical room/ward, and a twin-bed ICU, maintained at negative pressure, which can be installed anywhere within two hours by four people. WHAT IS MEDICAB: According to the statement by the start-up, it is a "decentralized approach for detecting, screening, identifying, isolating, and treating Covid-19 patients in their local communities at these portable microstructures."

It was recently launched Wayanad, in Kerala where the units are being deployed to treat Covid-19 patients, using grant funds from US-based NGO Habitat for Humanity. The start-up plans to send MediCAB units or micro-hospitals all across the nation as soon as possible. According to the co-founder, the portable micro-hospital unit can be customized. It can be developed to include four zones: a cabin for healthcare workers; a chamber for patient screening; isolation wards; an ICU(s). Each isolation ward can be equipped with two beds. Zones can be added to the micro-hospital structures depending on the requirements, space, and budget. The setting of the pilot project in Kerala cost rupees 1800-1900/sq ft. It is well-equipped with 15 beds, a spacious area of 800 sq ft and is fire, water, and termite-resistant. The microstructure has build-in bathrooms, connected to the water supply and electrical exhausts with an industrial dome, air conditioning, fans, and lighting which are plug-and-play and can be immediately powered. Six such units can be transported in one truck and can be deployed at any time to any place. MODULUS HOUSING AND EARLY DAYS: Shree Ram Ravichandran, Co-founder, and CEO of Modulus Housing, says that the idea for the start-up came to the duo in 2015, while they were 2nd year engineering students. In the same year, Chennai's devastating flood claimed hundreds of lives along with the shelters of the lakhs of people which startled them. In 2016, the Co-founders came up with the idea of foldable housing to provide solutions to people displaced due to natural disasters and started working on the prototypes as an academic project. The primary motto of this start-up was to build micro infrastructures that are foldable cabin houses to provide shelters to those who are facing issues related to disaster relief, refugee housing, defense, events management, medical and educational camps, hotels, and MSME, including the housing issues of the migrant labors.

PRESENT DAY SCENARIO: Modulus Housing partnered with Sree Chitra Tirunal Institute for Medical Sciences and Technology (SCTIMST), Thiruvananthapuram, which helped them with the medical design and clinical inputs while they engineered it and launched MediCAB. While the start-up has received CSR funding from a US-based bank for developing a 100-bed facility, they are also talking with other state governments for the deployment of MediCAB.

"The outcome of this pilot project in Kerala will help in proving the applicability of the technology and the advantages of micro-hospitals, with MediCAB as an instant infrastructure solution", says the CEO.

Modulus is working on a dual design where these can be rapidly launched as Covid-19 isolation wards and Post Covid-19, can be transformed into micro-hospitals/clinics in rural India where the medical infrastructure needs to be augmented. While, according to data by the World Bank, India has only 0.7 beds per 1,000 people, MediCAB can bridge this massive gap and can save this crumbling healthcare infrastructure in the face of the global pandemic.

Gauahar Khan Soon To Be A Bride, Shared Beautiful Pic Of Her Engagement...

After 2 Major Setbacks, This Dancer Got Google To Support Her $ 50 million...

Biggest Health And Well-Being Trends That Will Dominate 2022

“After Divorcing Serves The Country”- A 17 Year Old Girl Got Married To...

An Unsung Hero KM Chinnappa Never Budged From His Duty In Spite Of Having...