The application helping people to become self-reliant is one and only MEESHO. Let's know about the inside story - How MEESHO came into existence? 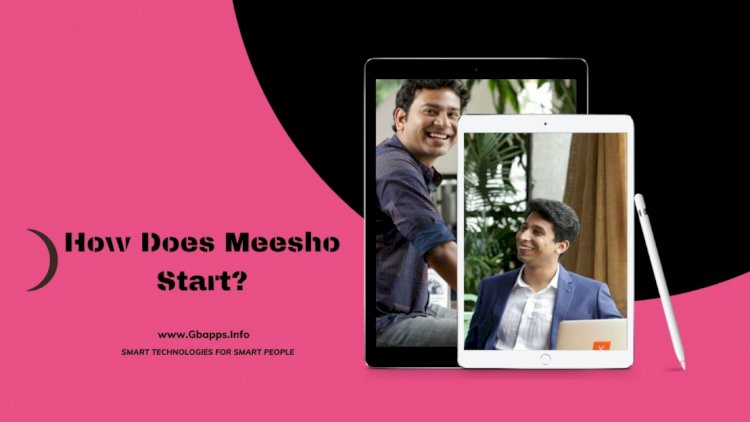 The founders of the cool application Meesho are IIT Graduate Sanjeev Barnwal and Vidit Aatrey. The year of foundation is December 2015. It is an Indian-origin social business platform where small businesses and individuals can do business from home without any investment. In 2016, Meshoo was selected for the Y combination and was one of the three Indian companies selected. This is an app that allows many housewives, students, and unemployed people to earn ransom amounts by opening a business with zero investment.

Meesho is based in Bangalore, India. Individuals and small businesses can launch their online stores through social networks like Whatsapp, Facebook, Instagram, etc. In 2019, Meesho received an investment from Facebook and became the first Indian company to receive an investment from the US social media and technology company Facebook. As the first, Meesho's target housewives & students.

In 2015, Sanjeev Barnwal and Vidit Aatrey established FashNear, a hyperlocal fashion discovery, and commerce app. By the end of 2015, they turned to Meesho, which enabled them to take their inventory online through social channels and physical stores.

What do you really understand By MEESHO? If you are looking to make money on home apps, Meesho is your largest Indian-origin social commerce platform on the list. There is no limit to how much you can earn from home. The best thing about this platform is that anyone can join Meesho, which includes businessmen, students, regular employees, housewives, and many more.

In 2019, Facebook invested in Meesho, it is the first time the company had invested in Indian startups. Meesho also received $125 million in a Series D funding round led by Naspers.

In 2021, Meesho increased its value to $ 2.1 billion after raising $ 300 million led by the Softbank 2 Vision Fund. Shunwei Capital, Facebook, and other investors also collaborated.

Meesho began his career in December 2015 with two IIT Delhi graduates. They founded Meesho, a social commerce platform that gives access to users in order to sell products with the use of their social media platforms such as  Facebook, WhatsApp, Instagram, and more. The main reason behind the creation of this startup is to encourage the women's empowerment campaign. They are dedicated to bringing revolutionary financial independence to the lives of Indian women.

When Meesho's founders left a nice job so they could start something on their own. Initially, they started with the name FASHNEAR. They considered creating a fashion platform; the fashion equivalent of what Swiggy did with food. Their plan was in application to ask for different stores from different places. Potential buyers can choose three items from these stores and the courier will take them home. They could choose what they wanted, pay for it and return the rest. They found that the "Fashnear" business approach didn't work because people were less interested in making their products local and more interested in selling. Where the online marketplace sells its products 24/7, the offline stores they were associated with could only offer end-of-season sales. The advantage, however, is the in-depth knowledge of the market and also the ability to learn to communicate with retailers.

When Fashnear became Meesho. They got a good response, but there was still no income model. Each shopkeeper has created a platform that can access Meesho with Facebook login information. All data was then transferred and a website was created for its work with a few simple clicks. Unlike the WhatsApp model used by some shopkeepers, Meesho has also helped with automatic warehouse and inventory management. Then register 10,000+ stores in less than 6 months.

They found that most of our in-app stores are run by women who sell products from home and call themselves resellers. They discovered another interesting discovery: where a retailer adds new products to the Meesho program about every three months, resellers change their catalog on a daily basis.

The founders were in contact with vendors directly in their homes and realized they had no inventory. Instead, they only published products that other suppliers sold and bought on demand. One of the first vendors they spoke to (Vidit and Sanjeev), Anu (Bangalore), actually ran a group of vendors called Anu’s Boutique. She found selling online quite effective and risk-free. Meesho saw a unique business opportunity here. Not all resellers will have the access that these two have and, furthermore, no small business operating in different parts of the country can rely on each other so much that they can opt for the options of cash on delivery (COD). or have a return policy for the end customer. This is how Meesho became the platform to act as the bridge between the reseller & supplier,

Meesho's revenue increased to $ 42 million in 2020 and is the highest revenue the company has generated since its inception. Sales increased fourfold compared to 2019 when they reached $ 11 million.

To date, Meesho has shipped orders from 100,000 registered suppliers for over 26,000 PINs to over 4,800 cities. It generates over Rs 500 in revenue for entrepreneurs and serves customers in over 4,500 tier 2 and higher cities, providing e-commerce in India.

Meesho claims that more than 13 million business people are connected through their platform. It looks impressive that most of them are businesswomen. The social trading platform allows your sellers to start their own online business without any investment.

In Spotlight Over War With Centre, Twitter's Grievance Officer Resigns

Who Doesn't Dream Of Becoming A Boss? Here Are Great Ideas To Fulfill...