Nadal and Djoko To Battle It Out At The Last Slam Of The Year! 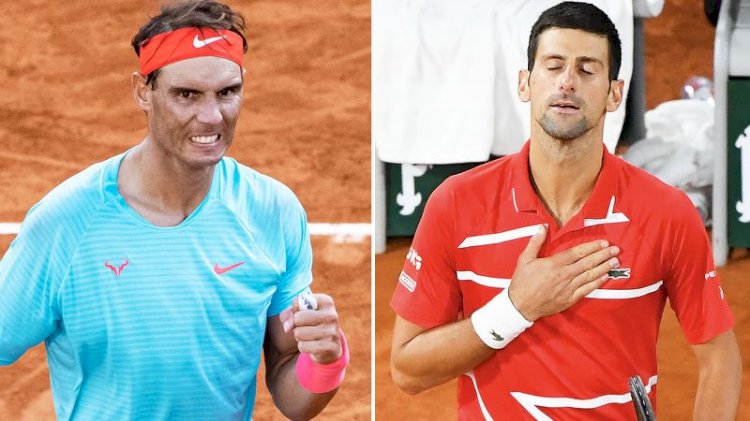 Rafael Nadal, the king of clay has not dropped a single st in his enroute to the finals of French open 2020. He convincingly broke Jack Sinner's serve in the quarterfinals and took revenge from Argentine Diego Schwartzman of his Italian Open loss. He hasn't dropped a single set and is the clear favorite to win the tournament. He was set favorite by the bookmakers from the beginning and has rightly proved them right as he looks in complete rythm and will give all that he has to equal the record of Roger Federer at French Open finals. Novak Djokovic on the other hand had to really sweat it out to enter the 27th Grand Slam final of his decorated career. His encounter with Stefanos Tsitsipas lasted over 4 hours and was finally taken to the 5th set which Djoko easily won. However, Djoko didn't looked in his prime and will have to regain his full fitness before teh finals as Rafael Nadal is going to make his sweat and the contest will be keenly watched by Tennis fans across the globe. Victory would earn him an 18th Grand Slam title while Nadal can match Roger Federer`s record haul of 20. While Djokovic, who had lost five of his nine previous French Open semi-finals, was given a fright it always looked as though his vast experience would prove decisive. In his post match interview, he praised the Greek and has said it will take some doing to overcome the scare of 12 times French Open winner Rafael Nadal. Djokovic is known for fightback and though, he has lost 5 out of last 9 semi finals at Rolland Garros, he will not make it easy for Nadal. The 12-time French open winner will have to bring in his A game against the best in the business. This is indeed the last slam of the year and just a few tournaments are left post French Open. Hence, both the players will battle it out in the mud to see who reaches Federer's tally before. It is though a matter of time as many believes that their numbers will surpass way beyond Roger Federer's. The younger lot Stefanos Tsitsipas, Dominic Thiem, and Alexander Zverev will have to find ways to break the trio of Federer, Nadal, and Federer. Roger Federer has started training and has hinted a comeback at the next year's Australian open. The Sunday's contest will be a box-office stuff, so fill up your popcorn bowls and enjoy the match on Sunday.

Brand Building: A Strategy To Accelerate Your Start Up

He quit his job for starting a seed tray company, today it has turnover...