Once Again, Meerut's Well-known Pediatrician Dr. Anuj Rastogi Marked The Victory By Saving The Life Of One- Half Year Old Child

"Saving Lives" is the sole aim of every doctor in life. And when they are able to save a life it is kind of a big win for them because they actually achieve their goal. So this opportunity recently came to Dr. Anuj Rastogi, where he uses his wit and years of experience to handle yet another sensitive matter successfully. Scroll down to know the full story- 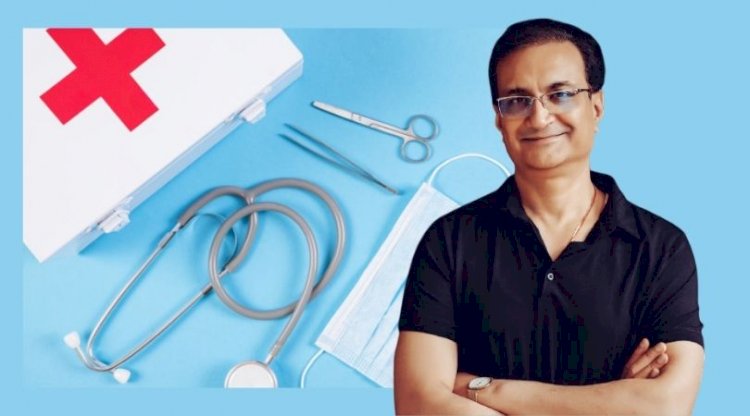 Dr. Anuj Rastogi has shared this sensitive case study through a Facebook post. The main reason behind sharing this case is that he wants to make parents a little more cautious about the safety of children. A little carelessness can put your child in a life-threatening situation. Therefore, it is really important for parents to supervise their children when they play with certain objects and give them only safe objects to play with to avoid unnecessary problems.

On one fateful day, a one and half-year-old came into Dr. Anuj Rastogi's emergency department with jerky respiration, a pale look, and his oxygen saturation just in the seventies. The child was struggling for life. His mother was carrying an X-ray which revealed an irregular shiny object. After a closer examination of the X-ray, he found,

"It was clearly visible in a large breathing tube (Trachea). It needed to be cleared as soon as possible."

Removal of a foreign body is done under Anesthesia and with the help of an expert Operation Theater Assistant. This procedure is termed Bronchoscopy. I called for the team, it was a Sunday. There was no hope of immediate assistance. It was going to take at least 30 minutes to technically prepare for this risky procedure.

He knew that he did not have so much time. The child was drowsy, every passing minute was heavy on them.

Keeping in mind the safety of the child he takes full responsibility on his shoulders - His exact words "I arranged my equipment. I thought I should start my procedure without Anesthesia as a child might succumb to cardiac arrest at any moment."

Due to case sensitivity, he was in dilemma to do this or give it up. "My brain was against my heart. If the child died during the procedure, I would be blamed for it, as the child was playful merely two hours ago.'

He highlights the case sensitive - "My other apprehension as he was already drowsy. He might have suffered brain damage because of low oxygen. These fears were stopping me from doing the procedure that too without Anesthesia."

He remembered God and explained the entire condition to his mother. He consented to go ahead. He gathered the courage and started the procedure in the ward.

He says- "My bronchoscope had further pushed the foreign object inside and the child became more hypoxic, more vulnerable for death. I was shivering with fear of losing him in my hands."

He quickly shifted him to OT. He also narrates how the entire team gets involved in the case to save the child. "We tried to oxygenate him with high-flowing oxygen. Meanwhile, the Anesthetist joined in now and I was feeling stronger. I again tried to grasp the hard object in the trachea, it was slipping from the forceps. In my second attempt, I removed this and the child felt lots of relief and started a meaningful cry."

He explains his happiness level by saying "My eyes had tears and my joy knew no bounds, was finally thankful to God to have been by our side, after this roller coaster journey of 15 minutes. It was a piece of stone that was aspirated into the airways by a little explorer. Now I was feeling so much blessed as a child who had not suffered brain damage due to hypoxia."

As a Doctor, he has to think a lot about a patient’s long-term future as well as their physical and social security. These successes have further increased his faith in God and his work.

He advises parents - "Be careful with these wonderful explorers especially 6 months to 2 years old who always want to touch and taste any new objects in their approach. They learn faster as their awareness improves. It sometimes puts them at risk for choking, drowning, falls, burning or injuries."

All these accidents are life-threatening even with the slightest carelessness or negligence from the family's end.

55 Is Just A Number, A Woman Entrepreneur Proved It With Her Natural Skincare...

Reliance Told The Price Of Jio Phone Next, sale Will Start On September...