A tractor was set on fire near India Gate in the heart of Delhi this morning during protests against the controversial farm laws. 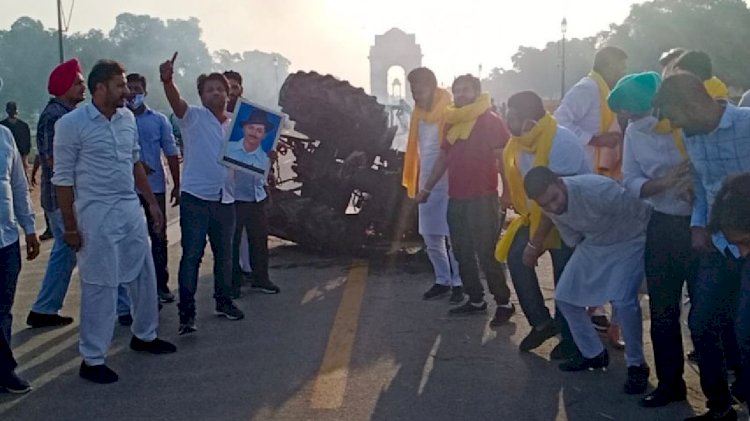 The fire department, they said, received a call at around 07:42 am. The group, which comprised of at least 20 people, escaped before the police arrived. A group of men set a tractor on fire near India Gate in Delhi to protest against the contentious farm bills on Monday morning. Five persons have been detained so far, police said.

“At least 15 to 20 persons arrived in a Tata 407 at around 7.30 am and tried to set a tractor on fire. They claimed to be members of Youth Congress Punjab,” DCP (New Delhi district), Dr Eish Singhal, said. The fire has been doused and the tractor has been removed. Legal action is being taken in the matter and identity of the persons involved is being ascertained. Five persons have been detained till now and one vehicle has been sized. Not just in the capital but the bill is being protested all across the country. Punjab chief minister Amarinder Singh on Monday said his government would approach the Supreme Court over the issue of new farm laws. The government has asserted that these bills will allow farmers to sell their produce anywhere they want at a better price. However, farmers have expressed apprehension that the Centre’s farm reforms would pave the way for the dismantling of the minimum support price system, leaving them at the "mercy" of big companies.

The farmers' protests in the country seem to be heating up even as the BJP-led NDA government tries to convince farmers that the bills would help deregulate the agricultural markets and help farmers in the country earn more. On September 25, farmers across the country held massive protests, supported by several farm bodies. Over 50,000 farmers protested in the state of Maharashtra. Protests were also held in Punjab, Haryana and small parts of Madhya Pradesh. Highways and railroads were blocked in many places. The agitation saw large-scale participation but to no avail. President Ram Nath Kovind gave his assent for the three contentious bills despite the massive farmers’ unrest in the country. The Centre slammed the Opposition for misguiding farmers and reiterated that the three bills would help in increasing farmers’ income through private investments in the sector. However, opposition parties kept attacking the government while farmers continued protesting. Prominent voices like P Sainath of the People’s Archive of Rural India also slammed the Centre over its farm bills. Senior Congress leaders including Rahul Gandhi and P Chidambaram have also been questioning the Centre over the farm bills. Gandhi even termed the farm bills as “death orders” for poor farmers. It may be noted that over 86 per cent of the country’s farmer can be categories as marginal farmers. BJP-Led government is trying its best so that this protest ends while many states have decided to move to court in this matter.

Lost His Parents At The Age Of 6 And Worked As Child Labor, Now Owns A...

Tangerine's Sustainable Jewellery Is Made From Spices And Seeds.