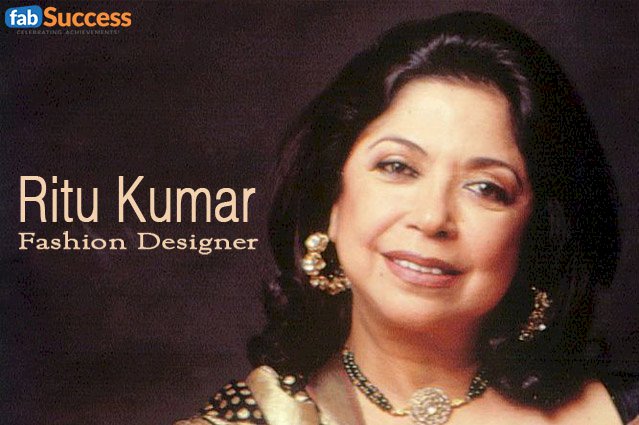 Ritu Kumar, an idol of the Fashion Industry

Ritu Kumar is one of the most famous Indian fashion designer. Sadly, we know little about this exceptional lady but she is a milestone in the Organized and Boutique cultured fashion industry of India. At present, three labels runs under her supervision- ‘Ritu Kumar’, ‘Ri’ and ‘LABEL Ritu Kumar’.

Overall, she owns 35 stores across this world and her designs have changed the face of the fashion industry throughout the world. Her designs are worn by both Indian and International celebrities including Priyanka Chopra, Aishwarya Rai, Lara Dutta and Dia Mirza along with Mischa Barton, Late Princess Diana, and Anna Ivanovic are world famous.

She is mother to Ashvin Kumar, best director/writer as he was the youngest Indian to get nominated for Academy Awards.  Her other son is Amrish Kumar, who is the founder of their label.

Life in the Shoes of Ritu Kumar

Though she had studied at a museum, her career into the field of textile happened to her by accident. There was a village with the name Serampore situated on the outskirts of Calcutta. The village was originally a Dutch colony whose self-grown art was wiped out by the Britishers.

She saw the brilliant skills of some of the talent left over in the people there and saw it as a great opportunity. Ritu Kumar realized that all these people lacked the exposure and opportunities. She was sure that not only those people but the investors will also get benefited by helping them.

In 1969, she changed her career path by starting her brand. She only had four hand block printers and two tables. It is quite surprising because her first set of sarees were nothing but a just pure accident.

now there were enough sarees. The first exhibition by Ritu held in Park Hotel, Calcutta turned out to be a significant success more than her expectations.

It boosted her confidence, and she opened her first retail. With this, she became the first ever woman to introduce the concept of boutique in India under the brand “Ritu”.

Ritu used to travel all around the globe to different museums and art centers to find new printing blocks. She used to give those to her workers to try them out. In the early 70s, during one of her tour she discovered the ancient Mughal craft, Zardozi. The art had been forgotten, but she revived it by using it in bridal outfits and heavily designed clothes.

After some time, she brought her family members to manage. Her husband helped her in handling the business commercially, and her kids used to travel with her everywhere.

Ritu faced many challenges as Britishers had entirely destroyed the art from its roots. There were no journals, nothing to study and Exploring was the only way.

Another problem was that import was closed, and there were no connections with the outer world. Despite the issues and challenges, Ritu worked hard, and it took a short time before everyone started appreciating her work.

Now Ritu Kumar was a well renowned and established Fashion Designer in India. She even wrote a book, “Costumes and textiles of Royal India” in 1999. The country was changing as globalization was at its peak. She saw this as a great opportunity and started bringing out new designs, different from the previous ones having an outline of the western wear.

She focused more on younger people. While doing all this, she designed outfits for many Bollywood films. High profile stars like Aishwarya Rai, Priyanka Chopra, Diana Hayden, Sushmita Sen and many others. She tied up with both National and International beauty pageants.

In 2002, she started a new wing called Ritu Kumar,”LABEL“, She started this by joining hands with her son Amrish. Soon after that she spread her name into the luxurious segment by launching a new sub-brand with the name, ‘the tree of life’.

After a year, she founded the All India Artisans and Craft Workers Welfare Association” (AIACA) along with many other people. The company has expanded since then and presently has 35 global stores. They have two factories where goods are being manufactured with one in Calcutta, and another in Gurgaon.

Ritu Kumar started at a very smaller level, but now her company has made a landmark in the fashion industry. Her name and work both are appreciated globally, and she is now an idol in the Indian fashion industry.

Though there are countless proud moments for her but some of the major achievements of her life are:

An Edtech Startup That Provides Comprehensive Education By Combining Liberal...

FAU-G Will Include A Galwan Valley Stage, An Indian Alternative To PUBG...

From 30,000 Rupees And Used Second-hand Laptop, The Founder Of The Event...