This article is about an IAS officer whose father died during his boards and had a cycle repairing shop! 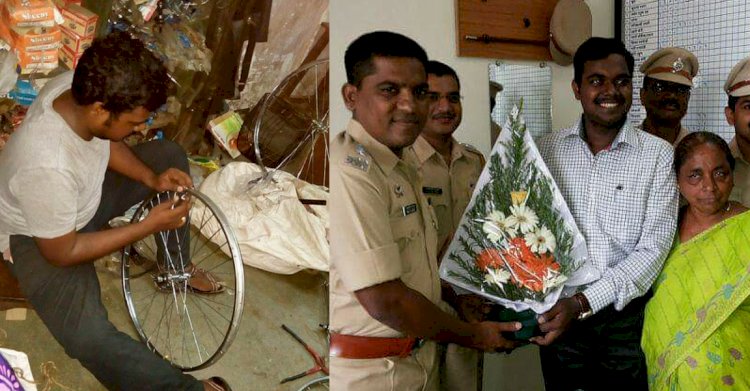 THE LIFE SUMMARY OF VARUN BARANWAL!

IAS Varun Baranwal was born in Boisar in Palghar district of Maharashtra. He belonged to a poor family as his father had a cycle repair shop and his mother was a housewife.
The most difficult time in his life was when his father died on MARCH 24, 2006 and he had to manage his studies as well as family earning.
Varun was to give SSC exams in 2006 along with class X exams when his father died. That was the time when a true warrior emerged with growing colors. He passed the SSC exams by gaining 89 percent.
After class X, he didn't have ten thousand rupees for admission in class 11 so the money was provided by his father's friend who was a doctor. He continued his studies with the science stream thereafter. His mother uses to work on her cycle repairing shop and he took tuitions to earn money. Thus his mother too played a great role in his life. He in his academics was so strong that all the teachers were keen to know about his family background. When they came to know that they all paid his class 11th and 12th fee and he studied with great focus and enthusiasm. During these two years, he and his mother had saved 1 lakh rupees so he went for his dream and pursued a bachelor's degree in engineering in electronics and telecommunication branch from MIT PUNE. Seniors in that college frightened him telling you'll surely get a backlog and if not then you haven't completed engineering. He then reacted positively and remembered one single line by his mother:

' DO WHATEVER YOU WANT AND LET PEOPLE SAY WHAT THEY WANT, IT'S NONE OF YOUR BUSSINESS.'

He secured 86 percent marks in his 1st year of engineering and became a record holder for his college. Meanwhile again he had a problem paying a fee for the second year then his friends came up to him who paid his fee. One of his mathematics department teachers at the end of the first year came to know about his problems it was then she who knew very well about his abilities and then he studied fee-free in the 3rd and 4rth year of the college.
He emerged as a gold medalist in his college and university, spreading his charm theirs. In the 3rd and 4rth year of his college he gave GATE engineering exam and secured 384 and 143 rank respectively. He although got admission for IIT to pursue his master's degree but quit it for his job and family. He got a very good placement in the corporate sector but then people came up to him saying you are so bright you should go for IES i.e. engineering services.
He prepared three to four months for engineering services but being surrounded by different people he came to know about 'civil services'. When he started preparing for exams some people came up to him and be like:

'UPSC IS ALL ABOUT EXTRAORDINARY PEOPLE NOT ABOUT YOU'

but Varun again with a positive attitude began to prepare for exams trusting his potential to beat the EXTRAORDINARY! His mother too wasn't willing with him to study more as she became old and couldn't work anymore but he urged to prepare for civil exams consequently, his date of joining passed away and he didn't job a got Varun's mother too didn't talk to him for next 13 to 15 days. But later on, supported him to the fullest!
The most terrific part of his life came now and every UPSC ASPIRANT will be surprised to know in how less time he prepared for the exam. UPSC conducts three exams for IAS officer:
a)Prelims
b) Mains
c) Interview
UPSC exam where each aspirant wished to study 1 year prior to the exam and still isn't able to clear the exam but this man, VARUN BARANWAL! Prepared for prelims in only four months!
In January 2013, he began to prepare for prelims and in May 2013, gave prelims and cleared it too!
Now when he had to give the mains exam in December which consists of five different exams, namely general studies(1,2,3,4) and optional subjects. He didn't decide his optional until July. He studied four different subjects and at last while filling the form he decided his optional subject. While giving mains paper, his first two GS paper fallen on bad terms! He didn't do well in his GS 1 he was so disappointed with his result that he spoiled his GS 2 paper also, the time difference between the two being two hours only. But this man again came up with courage again, a true warrior like Samudragupta of the Gupta Empire in the 3rd century. He just had one thought in his mind:

He gave GS 3 and 4 very good. His interview was also very excellent. Later on, this man now truly IAS VARUN BARANWAL secured 32 AIR in UPSC!
This was the man who proudly said,

"from a cycle puncture wala to IAS officer for the nation"

Like the youngest IPS officer, SAFIN HASAN who said:

"I NEVER STUDIED LAXMIKANTH WHO IS BIBLE TO EVERY UPSC ASPIRANT."

"I NEVER STUDIED ANCIENT AND MEDIEVAL HISTORY FOR EXAM." • IAS Varun Baranwal was a man who always trusted himself in every situation. Belonging from a poor family, he studied well and was so brilliant in studies that his teachers and friends helped him in paying his fees.
• Varun got many negative responses when he went to college and when he left his job for further studies but still he remained calm and executed his decisions.
• He always had a positive attitude which helped him a lot! It is always said, "The way you think the similar it happens! " He was greatly optimistic!
• He never looks on negative sides of his life e.g. He never thought of having ONLY four months for prelims but thought he has four months i.e. 122 days for prelims!
• It was only his determination dedication and hard work which made him so successful.
Remember Lord Krishna in Gita said, "तुम कर्म करो परिणाम की चिंता ईश्वर को करने दो। "

✓ SELF -BELIEF AND HARDWORK WILL ALWAYS EARN YOU SUCCESSi
-IAS TINA DABI, 2016

It was something said by IAS TINA DABI in 2016 but IAS VARUN BARANWAL followed it in his life years back which gave him success! Positive mindset and hard-working nature was the best quality in him.

IAS VARUN BARANWAL MADE DECISIONS AND THEN PROVE IT TO BE CORRECT!

Youtube Makes Major Changes To Dislike The Video - Here Is Why

Top Five Most Influential Women In The Technology World