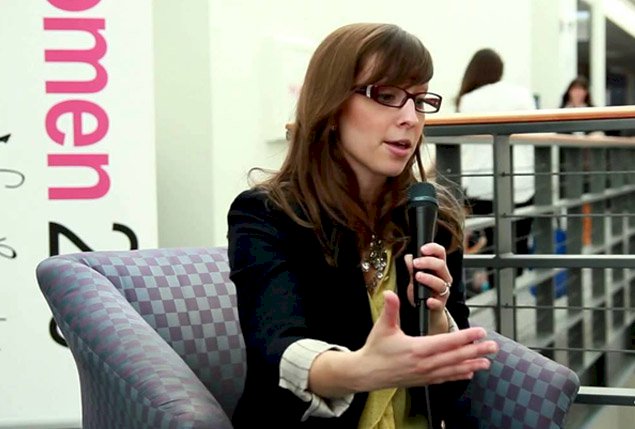 We all have important stuffs in our to-do-list but the habit of procrastination keeps on delaying them. How cool would it be, if we could get someone to do our errands! This used to be a fact pulled out of a magician’s hat, till Leah Busque, the founder and CEO of TaskRabbit, transformed it into a reality. Born on the 15th of the November 1979, this American Entrepreneur changed the way people work. Now with TaskRabbit people can outsource their daily jobs like getting groceries, vacation booking, babysitting etc to someone in their own neighbourhoods.

From being a Software Engineer in IBM to becoming an inspiration to many women across the globe; Leah has built everything by her own talent and abilities. Today she runs one of the most successful business models of her time and has taken her company from the ‘zero’ figure to a level where she has successfully raised a whopping sum of $38 Million from investors like Baseline Ventures, 500 Startups, Founders Fund, Shasta Ventures, Lightspeed Venture Partners, etc!

Leah Busque was born in America on 15th November 1979. She holds a degree of Bachelors of Science in Mathematics and Computer Science and graduated magna cum laude (with great honour) from the Sweet Briar College in 2001. Soon after her graduation, she joined as a Software Engineer in IBM, which is one of the most prestigious IT firms in the world. Her work profile was just technical and included Software Development, Messaging, Collaboration Software Development, C++, Java programming, etc. She was also present at Lotusphere 2006, 2007, and 2008. She had a technological background and continued working at IBM for seven years, but still she did not find the job appealing. She was very passionate and wanted to utilise the technology to reduce the gap between people in the real world. She wanted to do something innovative and productive but her current job was pulling her back.

So without wasting any more minute, she decided on to leave her job in 2008 and to work towards fulfilling her dream. She did loads of brainstorming but still was not able to find an innovative idea to work on. But the need for dog food on a snowy night in Boston changed everything. Finally, Leah had found the idea of her life!

She decided to build on an online medium which would enable people to get their most annoying chores done by someone else. This was a way through which neighbours would connect with neighbours, to pull off tasks like dog food delivery. And without a delay she started working on this project. She spent her whole summer coding and finally was ready with her dream project, the RunMyErrand (predecessor of TaskRabbit) and soon she was all set with her “service networking” model. In 2008 she launched this project in Boston with the first 100 runners!

After the launch of RunMyErrands in 2008, Leah was determined to improve on her project and was taking suggestions and advices from everyone possible. She consulted the CEO of ZipCar, Mr.Scott Griffith and he simply loved her idea! Leah was motivated by the encouragement and belief of Scott and came down to San Francisco to join Facebook’s startup incubator, ‘fb Fund” and got connected with other entrepreneurs from across the world. After the completion of this incubator program, RunMyErrands had secured a seed fund of $1.8 Million!

This amount laid the foundation of the main working of her startup and soon she hired her company’s first full-time employee, Mr. Brian Leonard, who too was a software engineer and happened to be one of her colleagues in IBM. Soon enough, in 2009, she hired Mr.Tim Ferriss who became her company’s first advisor. Now, her company had begun to take some shape and position. The years 2009 and 2010 saw the company treading the path of progress & transformations strategically and aggressively!

The April of 2010 saw a drastic change, Leah decided on to change the name of the company from Run My Errand to Task Rabbit. Task Rabbit online and mobile application was made to be bit more user friendly and simple for a laymen, and included help for everything ranging from simple deliveries to longer-term office tasks. It was now meant to function like the eBay for the real-world labour. The user was supposed to just:

For the convenience of the users, Leah also brought about some changes in the application:

The startup was gaining popularity among masses and the workforce of the company was majorly comprised of students, unemployed workers, retirees, and stay-at-home moms, with ages ranging from 21 to 72. The company has set an average cut of 20% for each task.

In June of 2010, yet again Leah took a major decision. She decided to shift her operations from Boston to the Bay Area of San Francisco, and soon enough, she along with her colleagues was functional with their new setup in San Francisco.

The month May of 2011, brought new and happy surprises for the firm as now it had earned a stupendous sum of $5 million and had grown with the inclusion of 13 more employees. The company also witnessed the figures of the Task Rabbits reaching 2,000 in the same period.

By the time October approached, Leah and her team were already done with the launch of an app for Task Rabbits. Now with this app, the users were given the opportunity to post a task with their iPhone as well. To completely focus on the development of the product, Leah decided to rope in Mr.Eric Grosse, the co-founder and former president of Hot wire.com to function as the firm’s new CEO.

By the end of the year, the firm had groped another fund raiser of $17.8 million. Finally the year ended with the company reaching the $4 million economic activity mark every month with a headstrong team of 35 members. And within the next one and a half year, the Task Rabbit expanded from just two cities to another six, including the metropolitans of New York City, Chicago, Los Angeles, and Orange County. They also kept on innovating in the Task Rabbit and finally came up with a new addition which was the “Task Rabbit Business”. This tool allowed corporate clients to outsource their business tasks to temporary workers for a comission of a nominal 26%.

The Task Rabbit Business idea was tested by Leah and her firm for a one whole year, and they soon realised that this idea brought about nothing but losses. Hence in the march of 2014, Leah eventually decided to shut down her Business Services portal. Because of this loss she had to lay-off almost 20% of her staff, and thereby she was finally left with a 52 member team in comparison to the earlier figure of a 65 member team.

But the problems did not seem to end with this.

Soon enough, in the mid of 2014, Leah’s executives at TaskRabbit noticed that a yet another problem was nascent. Her business was gradually declining and there seemed to be an up surging frustration among the workers who used the site. The company decided to counter this issue by adding another 1.25 million users to its system. It even doubled the force of contractors to an enormous figure of 25,000, but still something was not right. In spite of all these efforts, the company did not seem to get back to its original pace.

Soon Leah came to the inference that the whole the auction model which had been opted by the company has a major loophole. She realized that the model for bidding of the task was a failed model, at the ends of both the users as well as the contractors. The users seemed to be unhappy and complained that they were unaware of the price that they must set for a particular task that they wish to get accomplished or that there are not many contractors who wish to bid for their tasks or it took very long for the bidding to start on their job, etc. Whereas the contractors complained about the unfathomable time that used to go to find jobs.

After comprehending this problem Leah realized that her TaskRabbit needed a radical change. And therefore she decided to restructure the whole concept of the TaskRabbits!

She soon expanded the team for marketplace’s operation. This team worked meticulously hard to analyze the entire data to come to the actual reason that was leading to the decline of the company. Yet again she lay off undisclosed number of layoffs from the company. She reorganised and redesigned the whole business model of TaskRabbit and without much ado; she announced the rolling of a completely new and model of the company. Unlike the previous task posting and bidding model, the new model focused on direct hire. She incorporated very fundamental changes in the whole structure of the business and within a month a new system was in operation, which included the following changes:

After integrating the following changes, the company has not looked back. Its numbers have been giving a testimony to its success! It has finally managed to raise a whopping figure of $38 Million. In just a short span of a year, the company has expanded to function in 20 cities. Now it has added 20,000 Task Rabbits in its kitty and has finally taken to the overseas market with its international business in London.

After all the setbacks and losses, the exponential growth of Leah’s Task Rabbits has taken the world by storm. The figures of success have indeed left the markets wondering that what exactly the actual valuation of Task Rabbits would be amounting to.

Joint ventures and other Investments

Leah and her company have succeeded in making two acquisitions in all these years.

The Skill Slate was founded in the year 2009; it allowed the people of a locality to search for the local businesses and helped them in providing them with the required services they wanted. Since the business model of this company was a replica of Task Rabbit, Leah decided to acquire it.

One Jackson use to be an e-commerce site for kids clothing. Unlike a typical e-commerce site, it functioned as a voting and bidding marketplace. Since the acquisition, the original service of One Jackson has been shut off. Now instead of designing clothes in-house or aggregating collections from elsewhere, the site functions as a platform to connect consumers with designers.

Additionally; as a part of the acquisition; Anne Raimondi – Co-founder, One Jackson joined TaskRabbit as Chief Revenue Officer, Yee Lee their other Co-founder became TaskRabbit’s VP of Engineering, and engineers like Ken Mitsumoto, Bob Ralian, and Rob Robbins joined the company’s engineering team.

Throughout the eventful years of functioning, both Leah and TaskRabbits have been honoured with various awards and recognitions. Some of the most notable ones are:

Bharat Biotech Declared The Vaccine Or Dreadful Diseases Will Be Launched...

Five Most Underrated Travel Destinations Around The World