This Chandigarh Based Startup Is India's First Custom Apparel Brand

Litesh and Bhadul  who are engineers by qualification, have started India's first customizable clothing brand in India only to offer custom clothes. They got this idea when they were looking for a custom tshirt during the college and soon they grabbed this opportunity to start a brand which only customizes clothes. 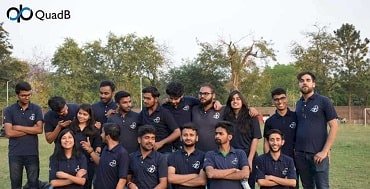 Engineers have often been into startups which has whole of a different perspective, products or services to offer in soceity. One such apparel brand that is started by two engineers is QuadB. Litesh and Bhadul  who are engineers by qualification, have started India's first customizable clothing brand in India only to offer custom clothes. They got this idea when they were looking for a custom tshirt during the college and soon they grabbed this opportunity to start a brand which only customizes clothes. When they started they found that the major problem in apparel industry was to source the bulk quality apparels on a budget and that is when they decided to take us this challenge to start with a new thought. This brand is a perfect option fort customizable merchandise for clubs, associations, and societies. Initially, QuadB was a wholly bootstrapped startup fulfilling orders for all quantities. To scale up, they required capital. The team managed to crowdfund around Rs 20 lakh with the help of a seed fund from their family and friends that helped them expand their business, and eventually paid off their debt.

Litesh & Bhadul started with customizing tshirts for their friends and colleagues in college. Soon they started getting popular peer to peer, word of mouth. From starting in their own college campus, they started catering needs of other colleges in Chandigarh and later in 2014, QuadB was officially registered to cater the need of high quality apparel, that can be both affordable and customised for entire country.  Their products range from regular single-day budget T-shirts starting from Rs 80 to premium corporate apparel that can cost up to Rs 1,500.

Their core team consists of Litesh, Bandhul, Vinayak, Rupin, Nishant, and Sahil, each member playing a significant role in formulating the perfect blend of QuadB as a business. The firm is continuously building relations with its customer base to ensure their satisfaction with the end product and has also expanded to 6 offices in cities all over India- Chandigarh, Mohali, Ludhiana, Delhi, Kochi, Ahmedabad. QuadB has worked for industry majors like UberEats, L’Oreal, Google, Microsoft, JP Morgans, Amazon, Swiggy, and Adobe, to SME’s in every city of northern India. Their firm has a stronghold over college students and has covered every top engineering and medical college all over India. The apparel firm has established a strong network among business owners of Tier II and Tier III in the past four years and has provided end to end solution to launch one’s own business apparel brand.

In its first year of functioning, QuadB managed to generate a revenue of Rs 7 lakh. By 2018, the company was able to multiply its revenue growth with all the hard work and created revenue of Rs 3 crore for 2018, 5 times the revenue for 2017. To date, they have fulfilled 13,000 orders and have expanded to 100 cities, 20 states, and five countries already.  For future, company aims to franchise building which is while they are keeping an eye on having an IPO in the next 5 years. They are also expanding internationally, and aim to grab a major chunk of the market share of custom apparel industries in the USA soon. QuadB hope to give back to the community in any way it can and plan to launch some more brands down-the-line.

"Don’t dream your life, live your dream" - Grab Your Motivation To Do...