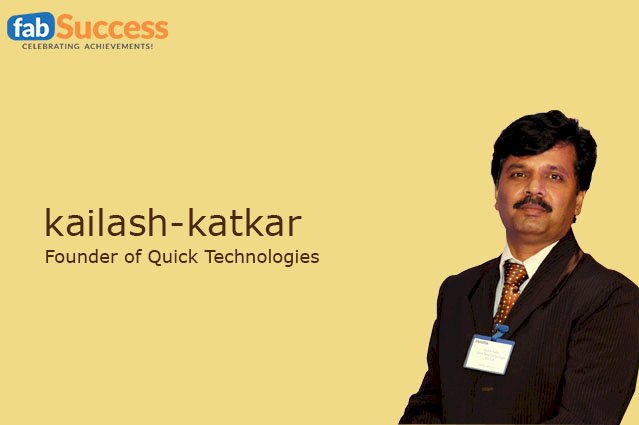 It is also known to be one of those very few companies who has managed to not only out beat its competitors like MacAfee and Symantec in its homeland, but has also succeeded in giving them a run for their money in their own neighbourhoods the US and other countries across the world.
To add to that, Kailash is also the initiator of the “Rotary Cyber Safety Initiative“, a series of awareness workshops which brings together cyber security experts, law enforcement authorities and academicians on a single platform.

The Early Life Of A School Dropout!

Kailash was in a typical Maharashtrian family that too in a small village of Rahimatpur in Maharashtra. Later, he grew up in Pune, where his father used to work at Philips as a machine setter.

Being at such a mediocre position at a time when India as a country was also going through a hard time, it was pretty much a given that Kailash had to dropout of his studies soon after he completed his SSC (10th Grade) around the mid-80 s, primarily due to family circumstances.

To help his family financially; Kailash then took up a job at a local radio and calculator repair shop. Additionally, with focus completely on technical matters, he also went on to learn the repairing of the then popular office gadgets.

At the age of just 19; he was later sent to his other shop in Mumbai by the owner for two- month training, after which he began working with him at his Pune shop for a salary of Rs1,500/Month. Over the period of next five years, this job gave him immense knowledge and experience of fixing calculators and radios, and the functioning of a Business in general.

In 1990, Kailash thought he was ready and felt that this was the perfect moment to take the entrepreneurial leap, to start his own calculator repair shop. Having said that, along with a seed capital of Rs. 15,000 from his savings, Kailash rented a small 100 sq ft office in Pune and started a one-man venture.

In the first year itself, the company managed to gain a decent income of Rs45,000 (in those times). But even with this polite success, Kailash yet was not satisfied.

Hence, to expand his portfolio, he began upgrading his skill-set and began reading and attending short computer courses.
And that is where it all began!

The Journey Of Quick Heal!

After about a year-or-something while continuing the calculator repair shop; he again transformed into a new venture called CAT Computer Services in 1993 with an office based in a small one-room electrical device repair station.

Now even though he did begin the new venture, the problem was that because he did not have the relevant experience or for that matter the qualification, generating business had become far more difficult that he imagined.

However, without losing the hope and will, he kept his efforts at his maximum and pitched customers aggressively. And these efforts turned fruitful when he got his first break a few months later and two families signed up for the maintenance of their personal computers for an annual fee of Rs.2,000 each. And banking on these new found clients he began getting more clients as well.

A few months later in September, he also managed to break-in to the corporate world by winning the annual maintenance contract for New India Insurance, which was soon followed by another group a month later.

And by the end of the first year, the company had made a more-than-decent turnover of Rs. 1 lakh.

Now goes without saying that, the growth was smooth and towards and upward scale, but Kailash could clearly see that the wave was slowly turning in the favour of computers. And to capitalize on this foreseeable future, he acquired the skill to fix computers and was soon seen signing Annual Maintenance Contracts (AMCs) to maintain these machines.

While at it, the world had also entered the phase of ‘viruses’, and these were the times when virus used to travel from a floppy disc to a computer, and not for stealing the data and using it for financial gains or any other motive, but just screwing the system.

So to help their clients, he brought in a standard solution wherein although there was no particular tool or concept of removing the virus, but they reformatted the computer.

He had also managed to see a future pain-point which would only evolve and become grave for the masses. Since the internet was becoming popular, it only meant that the computers would be at great risk and would create multiple channels for viruses to reach the machines.
So he then began working on a definite solution for the same.

They called this antivirus – Quick Heal!

The extended plan that lied behind the scenes was that, back in those days, almost all the other businesses involved in computer maintenance used to face this problem. So this software would not only help him and his customers and would help other competitors at large as well, and there would be plenty of takers for cheap and simple computer security solutions.

Since then there has been no looking back for the company. Some of the major developments made by the company till date, are mentioned below –

– In 1998 the company launched their corporate website called www.quickheal.com.

Kailash also faced a huge crunch of funds. Since he was bad at marketing his business, Banks never really understood his work or concept, enough to take the risk of lending him money. Hence, he hired a distributor, who although raised the sales volumes, but was also stealing a cut from the sales. That is when Kailash built his own team and covered his financial crunch.This effort of his paid off and the year of 2002, saw an immense growth in business which led to buying an office space of 2,000 sq ft in Pune for Rs. 25 lakhs. Soon, the company also expanded into another city and opened their first branch in Nasik, which was followed by opening of several other branches across India.

– Next year, the company expanded their area of focus and moved beyond from being just anti-virus solutions, to getting into the area of computer speed, mobile security and gateway level protection.

This was followed by another technological leap with the introduction of DNA Scan technology. This technology enabled the company to detect unknown viruses in real time without depending on variable factors.

– The phase between the years 2006 and 2010 were years of big jumps and news. They began by the signing of the deal with Microsoft for bundling of Quick Heal anti-virus with Genuine Windows XP And were followed by the renaming of the company to Quick Heal Technologies. Later in the year 2010; after approaching several banks for loans for software and market development, the company received their first round of investment from Sequoia Capital of Rs.60 crores. And with the help of these funds, the company expanded their reach internationally. They first began with opening sales offices in Japan and the US and then subsequently moved ahead and opened many more.

The uniqueness of this company is that, for the major part of their journey, they have managed to survive, grow and succeed without marketing and advertising of their products, unlike most of larger competitors. During this journey of theirs, they have also faced several setbacks and roadblocks, which have only helped them to evolve and grow further. Around the same time, they had noticed that a huge chunk of their employees had begun to leave the company, because they felt that their company was small and wasn’t growing or well-known.

These Five Mistakes Will Burst Your Road Trip Budget