Thiem Crashes Out In Five-hour Battle

US open winner Dominic Thiem crashed out of the French Open after losing to 12th seed Argentinian Diego Schwartzman. 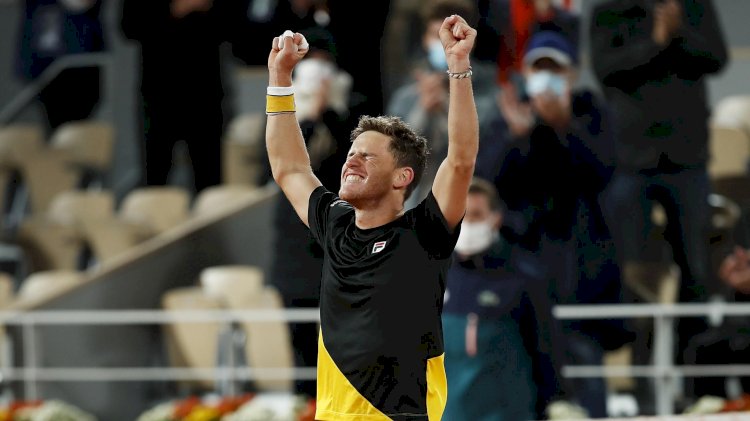 Diego Schwartzman played through the wind and rain, and into the dark of night, against Dominic Thiem at the French Open, contesting a total of 376 points spread out across five sets and five hours, eight minutes, knowing all the while he'd never won a match of this magnitude. And so, as he kept wasting chances to seize control of their quarter-final, kept letting sets slip away, Schwartzman yelled at himself or at his coaches, put his hands on his hips or smirked at his mistakes.

Then, two points from defeat against the US Open champion and two-time runner-up at Roland Garros, Schwartzman found his way and emerged with a 7-6 (1), 5-7, 6-7 (6), 7-6 (5), 6-2 victory by taking the last four games against a fading Thiem. This victory guarantees Schwartzman a place in the Top 10 of the ATP Rankings for the first time when the new list will be  published on Monday.

Schwartzman has set up a semi-final clash with second seed and 12-time champion Rafael Nadal. Nadal, on his way to his record of 20 Grand Slam men’s singles titles, managed to beat a lesser experienced Jannik Sinner 7-6(4), 6-4, 6-1 with the match lasting nearly 3 hours.“I’m very, very happy to be in the semi-finals again here at Roland Garros. No doubt that this is the most important place for me and the most beautiful place to play. [I'm] just very, very happy,” Nadal said on court. Dominic Thiem though, you gotta feel for him. He was in it till last but couldn't cash in on important points and that led to his downfall. He was one of the contendors of the title but now it's all about a Rafa-Djoko final. However they have to be at their best as Schwartzman defeated Nadal at the Italian opne and will come all guns blazing against Rafa. The match is scheduled on Friday and all eyes would be on Rafael Nadal as he is on his course to win 20 Grand Slams. Djokovic on the other hand has his quarterfinal match against Spaniard Busta. Djoko has just lost one match in 2020 and that too by disqualification.

All eyes are now set on the semi-final contest between Rafa and Schwartzman. The latter has played a mamoth match and will have to come up with different plans to combat Rafa.

Do You Feel Anxiety, Insomnia, And Low mood? The Deficiency Of THIS Mineral...

Know The Real-Time Life Journey Of John Bissell To Become The Lengend...