The wait for Samsung’s AltZ Life is finally over. After weeks of speculations of what this might be, the smartphone giant has finally launched the AltZ Life on Monday, August 10, 2020. The new feature provides its users with the ability to quickly switch between normal mode and private mode (Secure Folder) which could be triggered by simply double-clicking the power key which is now available in couple of phones. 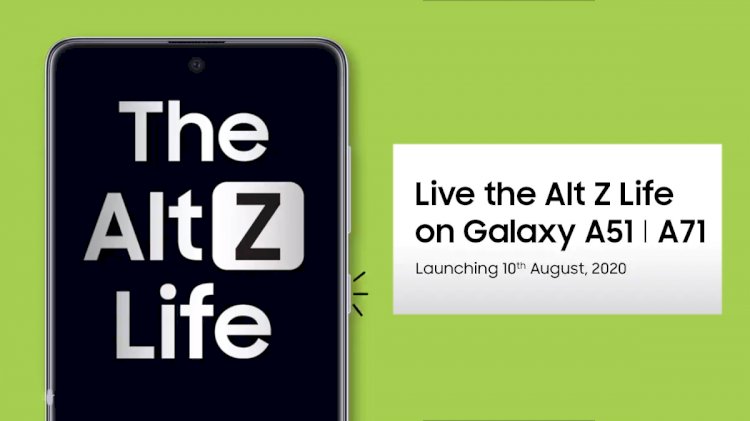 Security is a huge issue for smartphone users, especially for youngsters (Gen Z). In today's open culture, it's not easy to keep our privacy protected and if someone asks to see our phone, it's hard to say a no. For that, Samsung, India's most desired and trusted smartphone company, is presenting the new "Make for India" innovation, the AltZ Life - a life where your private content, apps, and interactions stay private with just double tap on the power button. The feature has been developed following the deep consumer insights that smartphone users are seeking greater privacy, as they transit into an enhanced digital life using their mobile devices. AltZ Life feature is available for only two smartphones as of now, Samsung Galaxy A71 (30,999) and Samsung Galaxy A51 (23,999), and both the existing and the new consumers of these two smartphones will be getting this feature through an update. "An industry-first innovation, this intelligent feature has been designed keeping in mind the inherent need of consumers, especially Gen Z, for enhanced privacy when it comes to storage and access of content on their smartphones. This helps eliminate the anxiety that consumers usually face while also sharing their smartphones with someone," Manu Sharma, Senior Director, Mobile Business, Samsung India, said. Samsung conducted research according to which, 79% of Gen Z consumers admit to having content like pictures, applications, and private chats on their smartphones which they don't want family or someone else to see. Moreover, they have many different things to hide and never wish to share with anyone else. Altz Life tool includes Quick Switch and Content Suggestions which have been developed by a team of young engineers at Samsung R&D Institutes in Bangalore and Noida using insights from consumer research. Quick Switch can be activated by double-pressing the power button that switches from normal mode to private mode. The Content Suggestions feature uses AI to suggest moving private content to Secure Folder. Samsung had launched other AI-based 'Make for India' features on Galaxy A series devices earlier this year which include Alive Intelligence, which offers Multilingual Keyboard, Smart Crop, Useful Cards, and Finder. AltZ Life takes the endeavor forward to make the consumers' interaction with their Galaxy A series (Galaxy A71 and Galaxy A51) more intelligent, intuitive, and secure. Samsung Newsroom India also mentions, "The on-device AI function also intelligently suggests moving private content to the secure folder." AltZ LIFE FEATURE - QUICK SWITCH: The company says, with Quick Switch, users can switch between a normal mode and private mode for apps like Gallery, WhatsApp, and others. The private mode of this app is "secured by Samsung Knox in the Secure Folder of Galaxy smartphones," as per the company's press release. It states that when switching from normal to the private mode for an app, the user will be asked for authentication that is different from unlocking the phone. When switching back to normal mode, no authentication is required. It will work even if the app does not have a private mode. AltZ LIFE FEATURE - CONTENT SUGGESTIONS: Another function is content suggestions that use on-device AI to suggest "moving private content to the Secure Folder." Samsung says this feature does not require interaction with any server or cloud as the processing is handled by the on-device AI. To use this feature, "users will have to select specific faces or a type of image that they want to tag as private and keep them secured in the private gallery of the Secure Folder," said the company. Then the AI engine takes over and identifies relevant images in the gallery. Once the initial set up is complete, the AI engine identifies images from the gallery and makes recommendations to move them to private space. According to Samsung, this is an on-device AI-based solution, therefore no information or image ever leaves the smartphone. As of now, there is no word if the aforementioned feature will be released to other Galaxy devices.

Amitabh Bachchan Reveals The Mystry Of Wearing Green Ribbon On The KBC...

How Declining Revenues Made Innovaccer India The First Healthtech Unicorn.